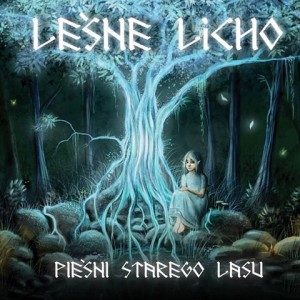 Poland certainly has its share of amazing metal acts of all styles… of course Graveland and Behemoth immediately come to mind on the heavier side. They certainly have folk metal covered too with awesome acts like Morhana, Radogost amongst numerous others including our 2015 debut album of the year winner in Merfolk. Now we come to the debut from Leśne Licho with their full length “Piesni Starego Lasu” (“Songs of the Old Forest”) and they are carrying the torch for possible debut album of the year for 2016.
This 6 piece released a demo way back in 2009 and have finally gotten around to getting a full length done. While I guess I would call them folk metal, they don’t feature any folk instrumentation of any kind…. vocals, guitars, bass, drums and keys. I could possibly call them pagan metal but are not overly heavy like most pagan metal in my opinion to be that, so folk metal it is. Closest relatable acts for me were Zaria and Brezno from Slovenia, Omut, Grai, Dalriada and maybe some of the Birds Way project by Aleksey Solov’yev (ex-Alkonost)…. notice a connection? Yes all have female singers as does Leśne Licho in Aga at the helm. Her voice is both commanding and inviting and is the highlight of Leśne Licho for me, the music is good too, of course, being the straightforward pounding metal variety.
There are some interesting tunes here, example “Droga Ku Walhalli” (“The Road To Valhalla”) I swear almost sounds like an 80s pop song with the keyboard being the main instrument in it. “Pani Jeziora” (“Lady Of The Lake”) has some nice ethereal vocals going on.
The rest of the tracks are all good on here too, maybe not super adventurous in terms of style but definitely solid.
Decent production and mix make for a more enjoyable listen and thankfully this is better than your average home made recording. Over 6 years in the making, Leśne Licho have put a decent first offering together and congrats to that. Next album hopefully will be sooner rather than later and I would like to see how they build upon this debut on a next release. A solid first album.