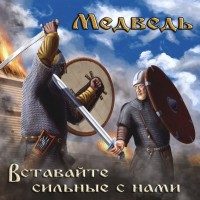 This is what we are assuming is the debut album from Medved or Медведь (“Bear”) and I hate to not give more information but we really don’t have any to speak of. The band is presumably Russian and they do have a VK page (Russian Facebook) but no regular Facebook page or website that I could find.
In any event what we have is a 9 track album….8 originals and 1 cover song (Butterfly Temple’s “Восход” “Sunrise”). This was a good place to start for me (with the cover that is) since they do remind me of a less doomy, more straight forward version of Butterfly Temple and probably a little folkier too. With an album title and cover like “Вставайте сильные с нами” (“Stand Strong With Us”) I think I was expecting Viking metal and was surprised at the more folk rock oriented album that this is.
I have to admit I was a little deflated initially but this grew on my rather quickly and I took it for what it was rather than what it wasn’t. There is no up tempo or fast stuff here…..just mid tempo folk rock with nice acoustic arrangements with guitar and flute, just bordering on metal. I can’t say there are any stand out tracks here per se as this has just a nice overall presence about it and doesn’t try to be anything flashy…. just solid and well played. Occasional female vocals do help break up the tracks which is a welcome change of pace. I think this is a great first effort and they can certainly garner some attention either doing what they are doing here or adding onto it just slightly to make it more impactful.
Solid production helps this as well which would have really made this a difficult listen if it was poorly recorded. A decent first offering from Медведь with hopes of a little more diverse 2nd offering soon.