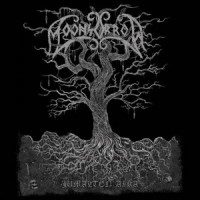 Before we get started, can you ever remember a time when Moonsorrow didn’t write EPIC songs? Well those early demo recordings like “Metsä” from 1997 and “Tämä Ikuinen Talvi” from 1999 were definitely simpler, probably more like black metal stuff….. even “Suden Uni” was still an attempt to define their style. Finally in 2003 the monumental “Kivenkantaja” was released and as they say, the rest is history, nothing but epicness since then. Continuing the epicness tradition is their newest opus “Jumalten Aika” (“The Age Of Gods”).
With only 5 tracks, some might say is this an EP? Hardly, 3 of the 5 songs top the 15 minute mark and this seems to be what Moonsorrow does best… longer, thought provoking, timeless compositions. There are only a handful of bands that can do this successfully. Saor and Finsterforst come to mind…. and Moonsorrow are the masters of it. Genre wise, they really don’t fit the cookie cutter folk, pagan, Viking or black metal categories…..bending the rules and/or not really caring to be categorized and that certainly works for me. For Moonsorrow fans, I think this latest release touches on all of their eras and gives a nice cross section of all they have to offer. I would also say this may be the folkiest of all the releases although I wouldn’t say they are starting to sound like Korpiklaani at all either. There are just a few more folk instrument touches throughout this album then in previous releases just to help propel the tracks. I would say everything has been said or will be said about this album with multiple reviews coming out. The one thing I really want to point out (and not to take away from the rest of the band who have done a stellar job as always) is the inhuman Marko Tarvonen on drums.
After repeated listens to this album, I was just listening to the percussion and thinking “this is extreme music drumming personified”. To play these style and length of tracks with the commitment, precision, personality and flair that he does should make everyone want to throw away their drum machine and find someone who can play like this. Of course the riffs crush, the keys are haunting and the vocals are as nihilistic as ever…..yes that is Moonsorrow.
The production and mix highlight every aspect of their sound from the sweeping choral vocals and the interplay of keys to percussion and guitars/bass. I think this album will be loved by the die hards as well as someone who hasn’t ever heard them before as it is heavy and accessible. Moonsorrow has just made my album of the year choice that much harder still. Another classic album