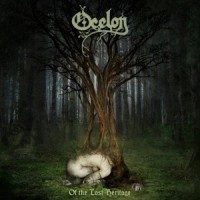 If you enjoyed a couple of other debuts last year (such as first albums from Merkfolk, Distoriam and Voloh), then you will certainly want to grab a copy of Ocelon’s first full length “Of The Lost Heritage”. This 7 piece outfit from Spain combine traditional instrumentation such as pipes, whistles, violin and mouth harp with the electrics and layered vocals to deliver the goods.
With a previous demo from 2014, they have really put their best foot forward on this debut…..polished, complete and certainly hits the mark. The 3 songs from the demo (intro instrumental “To Ocelon” and 2 tracks “The Moonhunter” and “Among Mountains”) appear here in I would presumed reworked versions along with 9 newer tracks (8 regular tracks and an additional instrumental). At 55 minutes, it certainly seemed to have been a lofty goal to have this much material on a debut, but there is certainly no bad tracks here with all of the ones appearing here to not be just filler. Besides the Merkfolk/Distoriam/Voloh comparisons, I was reminded of a touch of Drakum, Yonder Realm, Kanseil and Sekengard….. what is not to like about all of that? Nothing I can think of either.
All of the instruments have room to breathe and not smother each other and try to outplay each other….a lot of thought has been given to arrangement for sure. Vocals range from the brutal to the female and the group/backing vox….. little bit of everything. Want the heavier stuff? Go right to tracks like “Battletroll” which are more thrash than anything…. how about maybe a little on the softer side? “Homeland” and “Raven’s Crown” fit the bill. I think what I am saying is there is a little bit of everything on this album for all of your folk metal tastes. My wife (not a folk metal fan) just commented that when she heard this with breakfast cooking, it reminded her of being back on our Ireland trip….. if that isn’t an endorsement I don’t know what is.
This is as solid a debut as you will find……great production, well written and played tracks equally catchy and heavy, with a nice diversity in styles, tempos and moods. Definitely another contender for debut album of the year here at the site.