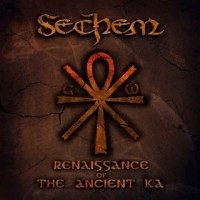 Apart from a demo in 2014 this is the first release from Sechem. An EP, containing an intro and five full songs, twenty minutes in total. Let’s get to know this Spanish band. Describing themselves as Oriental Metal, the oriental influences are indeed clear. The lyrics are about ancient Egypt, which gives Sechem a different focus than most folk metal bands. And folk metal it is. Flutes, distorted guitars, a clearly facilitating role for the rhythm section. It’s all there.

Apart from the lyrics, the music has an oriental feel as well. The instrumental and vocal melodies take you to the region of Egypt and Arabia. Not the most common of regions to be inspired by. Is it enough to stand out in the crowd? Well, that remains to be seen. The mostly mid-tempo songs are catchy enough. The clean female vocals are oriental enough, but sometimes they sound a bit tired. Then again, it fits in well with the melodies. Not sure there is enough power to bring it on stage, though. Another uncertainty is whether the oriental theme is interesting enough to last a couple of albums.

Mastering the instruments is not a problem here. Sechem consists of truly capable musicians. The song writing isn’t bad either. It’s all brought to us in a gentle fashion. Sure enough a couple of songs will remain in your head once you have listened to the album a few times. It’s nice, it’s okay, the Egyptian link makes Sechem a bit different. So yeah, let’s find out if the band is able to make a full album interesting.