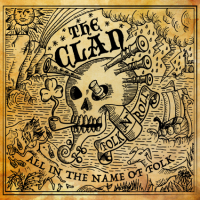 The Clan is a Irish-rock band from Italy, which released their second album ‘All in the Name of Folk’ recently. That they’re influenced by Dropkick Murphys, Flogging Molly, The Rumjacks, The Pogues and The Dubliners above all goes without saying. But with this album they focus a bit more on other kinds of music as well, the album title refers to Mötley Crüe’s ‘In the Name of…’ and U2’s ‘(Pride) In the Name of Love’ regarding to the band, but frankly I can’t hear this in their music, except for the track ‘It’s a long way to the top’, a famous AC/DC song. The rest of the music is still punk oriented folk-rock to me, as you can hear very well in songs as for instance ‘Whole Lotta Jig’ and ‘Horns Up And Fight’.
But the band honours the Emerald Island with the use of Bagpipe, Tin Whistle, Mandolin and Fiddle and traditional folk-melodies in their songs, as can be very well heard in ‘Folk’n Roll’ and ‘Reel o’ Fire’.
The recordings and production are well taken care of. All instruments sound very clear and bright and never interfere with each other.

So if you like bands like The Rumjacks and Flogging Molly, this is surely an album for you. With ‘All in the Name of Folk’ The Clan shows they deserve a place in the spotlight with the well known names in this genre.