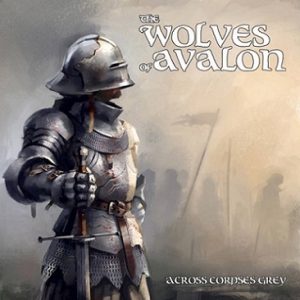 This new release from Englands Wolves Of Avalon will once again raise the question…..what are the criteria for being an “Album” vs. an “EP” or “Single” these days? Would three songs (1 30 minute track and 2 covers) be considered an album to you? You can decide after listening to this release as that is what it is.
First things first, I jumped back to listen to their last “Album” (more traditionally an album with 10 tracks on it) from 2014 with “Boudicca’s Last Stand”……I was immediately reminded of a couple of bands they remind me of….Primordial and Forefather on some level but more specifically in terms of style and sound, Belgiums Ancient Rites. They still have a historical/folklore vibe going with this new concept/track with “Across Corpses Grey”….. subject matter for the track is Englands War Of The Roses (Chapter of English history involving the struggle for the crown). The track varies between instrumental and spoken word to more straightforward and pagan metal with folky touches throughout… a 30 minute track is tough to pull off and keep super interesting all the time but they have done a decent job, although there are not a lot of fireworks but just a nice listen. There are numerous guest contributors here….. Thurios (of the mighty Drudkh), Hildr Valkyrie and an intro by Daemonskald of SIG:AR:TYR.
Besides the main track they have put two covers on here…..Nokturnal Mortums epic “The Voice Of Steel” and the classic “Die Hard” from Venom. Both are decent covers, the latter featuring AA from Primordial and Mirai from Sigh amongst others, including original Venom guitarist Mantas. Overall this is a decent release but one long track and two covers will probably be a tough sell as a new “album”. If you like historical centric metal, they definitely are in that genre but whether or not this is a necessity from a purchasing point of view is up to you. A nice release but I wish had a few more things to offer to possibly complete it and make it a little more worthwhile…..