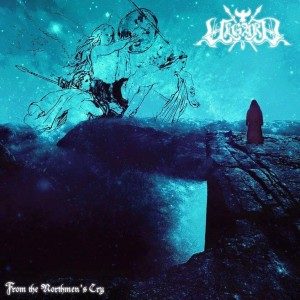 Formed in 2013, Ulgard has just released their 2nd full length album entitled “From The Northmen’s Cry”. I had heard something previous from them and jumped back into my archives where I had their previous EP and album (“The Way Of The Wind” and “Songs For The Wanderer” respectively). Most bands I want to put into one specific category and Ulgard defies that on numerous levels. Blending elements of black metal, symphonic, pagan/folk metal and ambient, Ulgard is definitely multi-faceted and can appear to be a lot of different genres depending on who is listening. I guess my comparisons would include Summoning, Midnight Odyssey, Panopticon and Limbonic Art with all points in between. With 9 tracks totalling over 56 minutes, there is a little bit of everything in here from nature sound effects to raw blast beated black metal to multiple keyboard styles and razor sharp guitar riffing. Even with all these styles the tracks still seem to have a connection to each other and not be so different from each other to not sound like one project. I happen to enjoy the change from style to style specifically on this release although some might find it a little schizophrenic, especially if you can’t get past the very thin guitar sound in the beginning but once the vocals come in it is a whole other album. The focus changes and vocals become more of the attention getter with layered screams and spoken word throughout. Tracks like “A Small Green Space Upon Earth” and “A Gift Of Rain” are relatively basic in structure and beautiful in their simplicity while the title track amongst others will make you feel at ease before getting pummeled. For those of you that want a more linear style album (most things sounding similar to each other) this may not be for you but if you want some diversity in all things extreme I think this is an album you should give a shot. While production/mix does take away from the overall experience, I found this to be very unique in terms of tying multiple styles together rather seamlessly. Probably not a folkster’s cup of tea but for fans of the blacker and darker stuff (me included) I think this is a project with a different and fresher approach to extreme and heavier stuff away from the trappings of other. Nice effort.