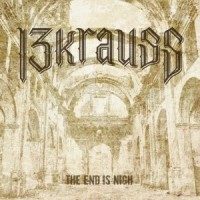 The Spanish 13Kraus released their second album “The End is Nigh”. The debut “Seguir en Pie” was released in 2013, one year after the formation.

Some songs are in Spanish, and others in English and are stuffed by accordions, fast guitars, pipes and gang vocals – at times, sounding like Dropkick Murphys and The Real McKenzies.
There are three songs in Spanish, the opening “Reza por tu vida” (Pray for your Life)”, “En mi ataúd” (“In my Coffin”) and the closing song “El mañana no espera (Tomorrow don’t wait)”. The six others are in English, and the highlight is “Doomsday” and “The Smitting Blow” – a kind of cowpunk, which combines country music.
The album is full of guest musicians, as Manuel Franco in accordion and Fer, from Mallacán, in vocals on “El mañana no espera”.

“The End is Nigh” is another great album from the Zaragoza band and is noteworthy. The bad thing is the terrible art cover, could be more creative.