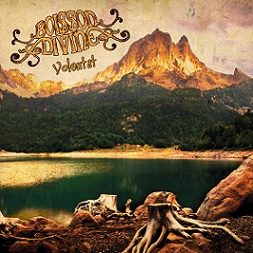 How do you like your folk metal? If you are into the upbeat, cheery, catchy and hook laden, then the new album from France’s Boisson Divine will be right in your wheel house. The new album “Volentat” follows 2013’s “Enradigats” and sees Boisson Divine continuing right where they left off…. and they left with an impressive debut.
‘Our leader here’ Michel gave the debut a nice mark and I can hear why……. equally metal and folk with crunchy riffs melding with folk instruments is a winning formula. Where “Enradigats” I think played it safe with song structure/riffing, “Volentat” is a little more adventuresome and it should be for a second effort. I guess I think they sound like a blend of Kanseil, Ulkan Newen and Skiltron, obviously the biggest difference is that they are French as opposed to Italian or South American like the others but they have a similar style to me. One thing that will strike you compared to the first album is more confidence in trying some different things while still being similar sounding to the first album. There is a real power metal vibe base to the songs with layers of folk instruments and harmonized vocals. Let us not forget the use of the Boha throughout (Gascony region bagpipe) which is used to augment to the main guitar riff or create the riff equally well. They also have a little mix of flamenco/Spanish guitar in a few tracks and that really again adds another dimension to what they are doing here.
There are a total of 9 tracks clocking in around 45 minutes or so with a few quick ones, mid length ones and album closer (“Caussada Deus Martirs”) at over 9 minutes. A couple of tracks will really stick with you after a few listens like “Los Tilholèrs” and “Quin Braguèr” for examples with easy to remember harmonies and riffs…… nice and catchy, sure to be crowd pleasers. I found this just be a great folk metal album and I mean FOLK METAL… not pagan, Viking, dark, etc….just FOLK METAL.
Pretty decent production certainly helps here too, guitars are not overly heavy but still have enough of an edge and the vocal mix and harmonies is really spot on. With a unique take on the genre, Boisson Divine have a good thing going here on their 2nd album and I think this can really propel them forward in a big way. Great 2nd album.