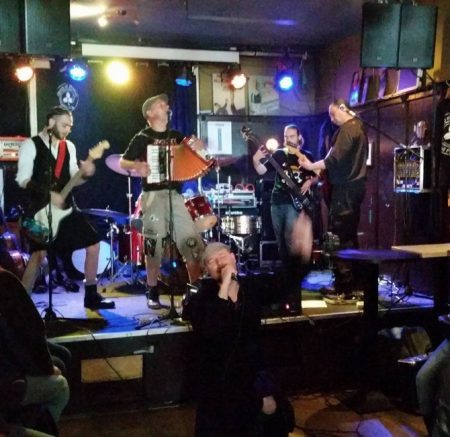 Great opposites today, while Vinicius is lying in the Brazilian sun, listening to the new Bunch of Bastards album, writing a review, I’m putting on some warm clothes and face a hailstorm to visit the concert of these Dutch guys. We have to make our way through the very busy market at this Koningsdag, the birthday of the Dutch King, when all Dutchies use this day off, to visit a nice market or a nice concert, or both.
The original plan was these folk-punkers would play outside the Irish Pub ‘Home’, but due to the terrible weather-conditions in the Netherlands the band plays inside the pub.
A little setback for these guys, because they can’t draw a lot of people with their catchy Celtic tunes. So, they had to cope with a small audience in the first songs. The band does this very well, you only notice there aren’t a lot of people when you turn around, the band is playing like the pub is full op fans. While Guiness is served at the bar, the band is serving their whole album and they added nice stuff like a new song, Flogging Molly’s ‘Drunken Lullabies’ and Dropkick Murphy’s ‘Rose Tattoo’ to this.
Their more uptempo songs like ‘Back in the Day’ and ‘Many a Good Reason’ give the show a nice sphere, but they have some nice add-on’s. ‘Hey Barkeeper’ is sung as a hymn for the barlady, who’s sitting on a stool on the stage for this song. ‘Sing with us Bastards’ is sung together with the audience of course, but Accordion player Andries grabs the opportunity to make a musical flirt with a dancing fan on ‘Katusja Kalashnikova’. Luckily for the band it became more and more crowded and at the end of their gig the pub was quite full. The people had a good time, despite the fact a lot of people were not there for the band, but only to have a great time at this Dutch holiday. But hats of to the band, which played as if there were hundreds of outrageous fans in the audience.
Rating: 8.5/10