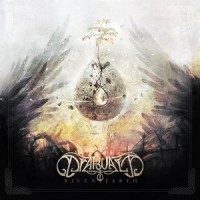 Now this is something you don’t hear every day. Pagan metal from France. These five guys are pretty productive. Since their founding in 2012 the band have released a demo, a split album and a full album, this being their second full album already. And you know what, they are starting to get very comfortable in their style.

Starter ‘Doomsday Argument’ shows what Drakwald is capable of. Bordering between pagan metal and melodic death, with a bit of folk thrown in the mix. Singer Thibaud Destouches has a very nice low grunt. Nice melodic riffing, up-tempo, bagpipes for our beloved folky feel. A bit of harmony singing gives Drakwald a angle of its own.

Other songs like ‘Primal Dawn’ contain some flutes. As often is the case the songs are being made interesting because of contrasts. The light footed flutes against the brutal grunts. A crisp clear guitar melody against thumping drums. Full speed alternated with medium tempo.

‘Despair of the last men’ is another fine example of Drakwald’s pagan folk side. Listen to it two times and the melody will stick in your head for the rest of the day. No fillers on this album. Good production, every member has his role and performs it skilfully, enough variation, songs not too short and no too long. I say: give them a place on the next Paganfest tour.