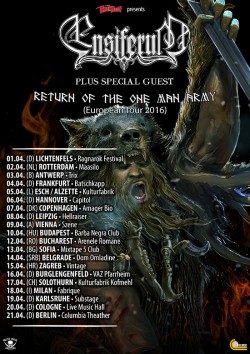 On the second day of the “Return of the one man army” tour, Finnish folk metal gods Ensiferum played in the almost fully packed ‘Maassilo’ in Rotterdam. Of course I wanted to see them, since they are one of my favourite bands in the genre and because their shows are always guaranteed for a big party.
Going to the venue, ‘Maassilo’, was something new for me. Even though I don’t live far from the city of Rotterdam, I somehow had never been to the venue before. Finding the venue from the metro is always easy when bands like Ensiferum play. You just follow the kids wearing warpaint and there you are. Doors opened at 18.30, but for some reason the doors to the actual hall where Ensiferum played opened exactly at 19.00, the time that the Danish folk/melodic metal band Heidra was set to play. So when the doors were finally opened and the whole line of people that were waiting in front of it could walk in, Heidra started playing 5 minutes later, so not much time to buy a beer or to find your best spot to stand.

Heidra
It seemed to me that that was the reason why Heidra started playing for about 30 people only. I felt a bit bad for them, because I knew the band already, listened to their album ‘Awaiting dawn’ a couple of times before and thought they deserved better than just this crowd that didn’t know exactly what to expect from Heidra.
In my opinion Heidra was a worthy opening act for Ensiferum. Singer Morten (whose voice sounds very good live!) and guitarist Carlos tried their best to get the audience going. In which they succeeded in my opinion. After 2 or 3 songs the crowd started to realize that the band that was playing was actually good and even some heads were starting to ‘bang’. I think the band got themselves some fans during the tour with Ensiferum so far. Unfortunately, the band only got 30 minutes of play time. I wouldn’t have mind it if they continued playing a little bit longer, but it was time for the second opening act of the evening!

Fleshgod apocalypse
Fleshgod apocalypse were next to enter the stage. This band is actually ‘Headline-worthy’ themselves. It was clear to me that in the crowd were a lot of people had come especially to see the ‘Italian death metallers’. To be completely honest with you, I am not a big fan of them. I write for Folk-metal.nl for a reason, and that is because my heart is with folk/pagan/Viking metal. Of course I do like other subgenres in metal, but for some reason Fleshgod Apocalypse is all a little bit too much for me and it just doesn’t appeal to me. Maybe it was also the combination of Fleshgod Apocalypse and Ensiferum that I found a little bit odd. Of course this is my humble opinion and of course I could hear that they perform well on stage and that what they do is different and distinctive from other bands. It’s not very often that I see metal combined with opera singing by a lady! I also really liked their stage outfits, their matching (bass) guitars and their acoustic piano on stage. Unfortunately the piano wasn’t always very good to hear.

Ensiferum
After they finished playing I was more than ready to see my beloved Ensiferum. For some reason they always seem to have fun on stage and really seem to enjoy and love what they do. I have never been disappointed when seeing them live. The last time I’ve seen them was last year, March 25, in Haarlem, together with Insomnium and Omnium Gatherum.
Starting off with ‘March of war’ the intro song of their latest album ‘One man army’, followed by ‘Axe of judgement’, the crowd immediately knew what they came for and the real ‘Ensiferum feeling’ was set. People went crazy and already in 10 minutes I got covered in beer 3 times.
I really liked the fact that they had a very varied setlist. Not only they played songs from ‘One man army’, but also ‘oldies’ like ‘Twilight tavern’ , ‘Lai Lai Hei’, ‘Iron’ and ‘Token of Time’ were played.
Between all the epicness, Petri took some time to introduce their new keyboard/accordion player Netta Skog, who is not at all an unknown girl for most fans. Of course we know her from Turisas, but she had already helped Ensiferum out to stand in for Emmi Silvennoinen while she had other duties on previous shows. It’s obvious that the crowd loves Netta, I think it’s because she is always smiling and really brings some more ‘fun’ into the band. The little solo she played on her accordion was very well received by the fans and especially the ‘battle’ she did with bass-player Sami.
Guitarist Markus had a little accident on stage when he fell and somehow got stuck with his shoe, unable to get up without a little bit of help. His band members thought it was all pretty funny and let him suffer for a while. Fortunately, he was not hurt and continued playing on his guitar while lying on the ground on his back. With some help of a techguy he managed to get up and got a big applause with the audience, which he received with a huge smile.
After 45 minutes the ‘Maassilo’ turned into one big steamy mess with of course some moshpits and people holding each other while headbanging and singing together. This is what folk metal and Ensiferum is about. About bringing people together, standing next to your ‘brothers’ and sing victory songs.
It was clear that the band just started their tour, because they still had a lot of energy.
The venue was nice and big, but because of its high ceilings, and the fact that the building is actually and old grain silo, didn’t do the acoustics very good. Overall I had a great time and look forward to see them again!