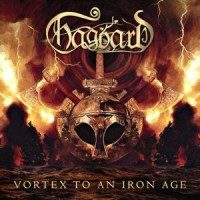 Brazil’s Hagbard are poised to release their 2nd full length album upon us with “Vortex To An Iron Age”. Their debut album “Rise Of The Sea King” from 2013 got an average review by Nick on here and I guess we never received their EP from 2015 “Tales Of Frost And Flame” for review. Stylistically, I am not sure what genre they should be in and therein lies the problem. I think there is certainly potential for these Brazilians but I think they have an identity crisis going on. The music tends to be on the folkier/power metal side while the lead vocals lean more towards death metal and these two elements seems to just not gel on this album. There are some successful tracks on here such as “Last Blazing Ashes” and “Inner Inquisition” which are simpler in terms of structure and feature clean and/or female vocals and seem to be very complete tracks with more direction and style. The majority of remaining tracks are OK with “Deviant Heathen” and “Shield Wall” I think being more enjoyable than the rest.
I believe what also hurts this release is the overall sound of it. I understand in this day and age that homemade and self-produced albums are all the rage. Some are more successful than most. This album suffers from a mix that has instruments clashing with each other for space and making it very cacophonous. Everything seems to be separate and not cohesive. The vocals are inhibited with a million miles away sound to them and not upfront in the mix where they should be. With killer releases this year from too many bands to name, this one could easily get lost in the shuffle. With 2 full lengths and an EP under their belts, Hagbard can certainly keep doing what they are doing and whether that’s gets them anywhere is impossible to say.
Hopefully a next release will actually show what they are really capable of with stronger songs and a style and mix to match……