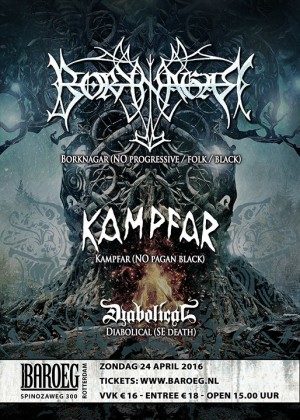 With their last album ‘Winter thrice’, Norwegian Viking / Pagan / Folk band Borknagar got the attention of the entire metal world. Before this album, they were deemed mediocre, not outstanding in any way. Unobtrusive, not bad, but not extremely good either. ‘Winter thrice’ changed that once and probably for all. How is it possible that this band is capable of making such a great album all of a sudden? I still can’t get around it. Read my friend Jeff’s review again to inhale the greatness of it.

So, of course, we should check them out while playing live in Holland. Even more so, because fellow Norwegians Kampfar would be performing as well. Ever since their ‘Mare’ album, Kampfar are steady participants of the black pagan community, with a distinct sound of their own.

A good turnout on the beginning of this Sunday evening, in spite of city football heroes playing for the League Cup. Four men Kampfar played a solid set. A little bit thin with only one guitarist, but the enthusiasm of the quartet made good. Apparently the first gig outside of Norway was in Rotterdam. That brought back a lot of good memories. And this was their 200th gig. The band loves Rotterdam and consider all present to be family. Without being ironic, that makes us feel good. Add to this a good sound, a very nice set and there you have it: a perfectly worthwhile concert. Play a song like ‘Mylder’ and you really can’t go wrong. (8)

No doubt most people were coming for Borknagar. I fully blame ‘Winter thrice’ for this. The thing that makes this album so good is the variety in singing. No less than three singers in the band, two of which play bass and keyboards. A lot of clean singing, contrasting with the harsh vocals of main singer Vintersorg. So expectations were high. Looking back, maybe a bit too high. Of all things that could make this concert memorable, the harsh singing did disappoint totally. No power in it. Not hitting the lows. Pulling away the mike to hide the fact that this type of singing today wasn’t good enough. And there was more. The place was too crowded for my taste. The band played a quarter of an hour less than they were supposed to play. And, this being the last gig of the tour, I would expect a little more madness on stage. It wasn’t there. In a word: it looked and sounded a bit tired. Still, the music is great, even if the concert wasn’t. Ultimate song ‘Winter Thrice’ is a very, very fine tune. So no waste of time, even if it was a bit disappointing. Hopefully next time Holland is the first instead of the last stop. (6,5)