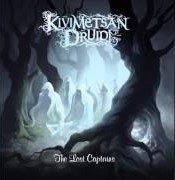 After a 6-year layoff (!) Kivimetsän Druidi have returned with a 3 song EP entitled “The Lost Captains”. Are you thinking what I am thinking…?? 6 years with no new music and we get a 3 song EP? Well we could either be aggravated or grateful, I am choosing the latter since this EP crushes. There will be time to be aggravated later I guess and I am presuming that an album is soon to arrive… wishful thinking.
So I think Kivimetsän Druidi really lays in the middle of all of the Finnish folk metal bands in terms of crossing over into more than one style, sometimes more epic like Ensiferum or Amorphis, doomy and dark like Moonsorrow or upbeat and humppa like Finntroll or Korpiklaani. The diversity is one of their trademarks but also hurts in some regards as sometimes things don’t really work in my opinion, but they always redeem themselves with more hits than misses.
This new EP hits on every mark for me from the songs to the production and everything in between. I think the easiest comparison would be to Eluveitie on this EP with a blend of Leeni-Maria’s and Joni’s vocals playing off of each other with music that goes from breakneck to introspective. Opening title track “The Lost Captains” blends Joni’s growls with the operatic Leeni-Maria’s stylings to perfection with the rest of the band (Rinska-guitar, Antti-Keys, Simo-Bass and Atte-drums) bouncing between, thrash, power, folk and symphonic all in one.
First single “Night Before The Dark” is a little more straightforward symphonic for but still has all of the elements of the opening track. Sadly, we are already at the last track with “Whispers Of The Wind” which may have more of a power metal ballad vibe overall but again still combines all of the elements in their arsenal. A total of 18 minutes in 3 tracks is nice but I will be greedy and say I want a lot more of this. Maybe the 6-year layoff was necessary to get to this point? Who knows? All I know is that this should be ushering in a new era in the history of Kivimetsän Druidi and I would say it could be what would be considered their golden age if they just stay on track.
Follow up album? It better be soon… this EP has put them front and center with their most sonically satisfying effort to date. A new album will cement the deal, up to them to get it out now. Great EP.