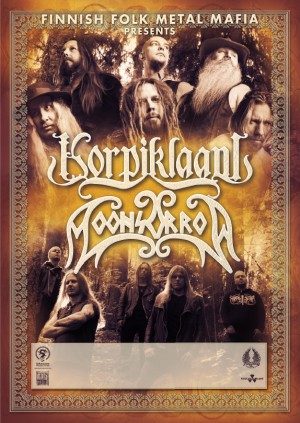 April seems to be a good month for us folk metal lovers living in the Netherlands. After the shows of Ensiferum, Skyforger, Ereb Altor, Månegarm and Equilibrium just a couple of days ago, it’s now time for Korpiklaani and Moonsorrow to hit the stage in Amsterdam. Today they are being supported by our very own Heidevolk, who will open the show tonight.
Kind of still exhausted and suffering from severe neck pains (probably from too much headbanging at the other shows mentioned above) I travelled to our lovely capital Amsterdam. When I arrived there, the place was already quite packed. Due to a huge queue in front of the ‘Melkweg’ and in front of the wardrobe spot I missed the beginning of Heidevolk, or was it because I insisted on buying a Moonsorrow shirt first? Probably a combination of both!

Heidevolk
The last time I saw Heidevolk play live was 2015, at the ‘Gothic and fantasy beurs’ in Rijswijk. So it was about time to see them again. Music-wise they are not my cup of tea but somehow I always feel a little proud of them because of what they have achieved as a Dutch folk/pagan metal band. They already shared the stage with a lot of ‘big names’ in the (folk-) metal industry and have a lot of fans abroad.

Today they were a good opening act for Moonsorrow and Korpiklaani. A lot of people know their songs and especially ‘Saksenland’, ‘Nehalennia’ and ‘Vulgaris Magistralis’ always seem to get the party started.
Of course they also played a lot of ‘newer’ songs from their latest album ‘Velua’, like ‘Een met de storm’, ‘Drankgelag’ and ‘De hallen van mijn vaderen’
Unfortunately the vocals weren’t always that clear. Both singers were having some difficulties to keep up with music sometimes, but Lars made up to that with the intro of the song ‘Vulgaris Magistralis’ where he showed his enormous lung capacity by singing one note for like 30 seconds with just one breath.
After one hour of playing time their show ended, if you wish to see them longer you have a chance in Dordrecht.

One of the main reasons I wanted to go to this gig was because of the next band; Moonsorrow. I think they are a one of a kind band and the absolute best of tonight. A band that can make songs of 15 minutes length, that after listening to it over 30 times you are still amazed of how someone of capable of making such masterpieces, can only earn my deep respect. They are quite different from Korpiklaani, not really possible to compare to each other actually.
They have just released their new album ‘Jumalten Aika’ the 1st of April. So they started off with the first track of that album which is also called ‘Jumalten Aika’. Sound, vocals, everything was on point. The only negative point I can think of was the kind of ‘dark’ lighting during the show. I think they probably choose to do it that way, but it was quite a task to make decent pictures for me.
Their play-time went by extremely fast! Their setlist was varied, some new and some old stuff but I kinda missed the song ‘Suden Tunti’ of their new album. Think it would have done good live. There was some crowdsurfing going on during several songs and as a special surprise Korpiklaani singer Jonne entered the stage to sing during ‘Ruttolehto’. It is actually not a very big surprise because also on the album you can hear Jonne sing in this song.
They ended the show with the wonderful ‘Sankaritarina’ which is one of my favourite songs of them.

Korpiklaani
After all the epicness of Moonsorrow and a lot of beers later, the crowd was very ready to see Korpiklaani. From experience I knew that this band knows how to throw a good old Finnish folk metal party. And yes, they did it again at the ‘Melkweg’ today.
The fact that they bring an accordion player and violinist to stage makes their music very ‘folky’. As soon as they started playing everybody was dancing, headbanging, making moshpits or holding their friends/beer.
The sound during the whole show was good, because it was not too loud and you could even listen to the music without earplugs (and without that annoying noise in your ear after)
Unfortunately I kind of lost interest after 5 songs. This also happens to me when listening to their albums sometimes. Because to me their songs sound very much alike. It would have been nice if they had threw in some “old” songs like ‘Midsummer night’ or ‘Keep on galloping’ just to make it a little bit more interesting for me. The whole show was very decent and not much more than that. But it was enough for the crowd to have a good time and for me to go home satisfied and with even more pain in my neck than before I entered the venue, because how on earth can you keep your head still while being at a metal concert?