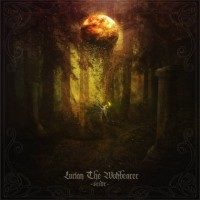 When we get in new music, I generally have a sense of what I am in the mood for review. When I saw a new release from Lucian The Wolfbearer from Cleveland, Ohio, US I was both intrigued and curious as to how we ended up with the new album. Why? I was semi-familiar with their material and kind of self­categorized them as maybe ambient or doom and probably not something we would ever get here at the site. So, I think I am still right with my genre choosing for Lucian The Wolfbearer (Lucian being the one and only musician on this release) but I think there definitely is more to it… and thus in need for review by us.
The first time I put this on I almost forgot it was on… believe me this is not a bad thing at all. It was like I was listening to my own thoughts, pretty good job of hypnotizing myself thru music I would say. Yes there is a big ambient feel to this but also incorporates some doom, Viking, black and death metal, not all at the same time but changes from track to track. At times I was reminded of bands like Blot, King Of Asgard and Windfaerer blended with some old school Celtic Frost and Death with ambient touches of Moongates Guardian and Erang. Maybe a doomier Midnight Odyssey? There
are a total of 15 tracks clocking in at a total of 1 hour 38 minutes which is astounding in pure volume and length of tracks. Tracks range from 2 to 19 minutes with most being in the 4­7­ minute category. If you look at previous efforts (such as “Paradise” released in 2015) the shortest track was 7 minutes, definitely went in a different direction on this new release. If you want a sense of where the older material lays, check out closing track “Paradise (Chapter III­Ascension)” which I assume is the 3rd part of a trilogy started on “Paradise”. More of an ambient feel here…..but most of the other tracks I would say have more of a Viking death/black metal feel. Tracks like “The Wanderer”, “Sei∂r” “The Helm Of Awe” amongst others drip with Viking lore and are delivered with authenticity. I actually think that the foggy production, relatively low­fi overall feel helps this out in a big way to be darker and more mysterious. There really isn’t any folk that jumped out at me on here but that is OK because the keys and interlude parts certainly were interesting and appropriate. While I can’t say I listen to a lot of doom, black metal or ambient as much as I used to, the new Lucian The Wolfbearer has enough of all three plus the Viking stuff to give me enough of all to last a good long time.

Some really interesting stuff……looking for folk metal? Probably not here but touches on most of the other “extreme” music styles…….something for everyone here…..great new album.