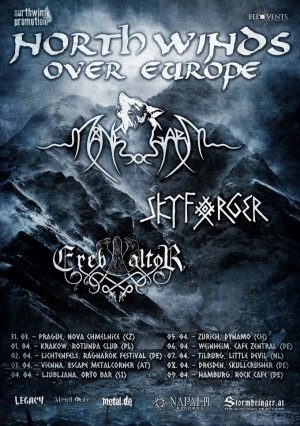 North Winds over Europe
It’s the 8th day of the North Wind over Europe Tour of Månegarm, Skyforger and Ereb Altor. On this thursdayevening the Dutch Metalclub was a kind of ‘Little Loki’ for one night, with Folk- and Pagan Metal by three bands which travelled down south from Sweden and Latvia.

Ereb Altor
The Swedish pagan band Ereb Altor did a fine job with the kick-off of this evening. Their, mid-paced songs are received very well by the metalfans in this small venue. No surprise Ereb Altor played a Bathory song, since their great fans of this Viking mastermind.

Skyforger
After this very nice start of the evening it’s time for Skyforger. This band from Latvia is making folk and pagan metal for more then 20 years. This would be an interesting one… I’ve seen the band a few years ago, when Kaspars was still a member of the band, playing the bagpipes and kockle. Since I’m a very big fan of the folk-elements in the music, I mourn his leaving of the band. But still the band did a great job with their recent album ‘Senprūsija’, the music is derived of a lot of the folk-elements, but what remains sounds very nice as well. And fortunately Pēteris played the kockle at their concert we all could see at their DVD ‘Senprūsija Live’. So I was excited when Skyforger entered the stage, or should I say Forger? The band was stripped down to a 3-man band, leaving Alvis, the second guitarist at home. They did a very fine job at this, but with this minimal cast there isn’t much room for the folk-elements. The folk in Skyforgers music is almost everywhere reduced to the vocals of Edgars, this bass-beast brings a bit of folk in the music with his delicious deep, low voice. What’s a Skyforger concert without ‘Migla, migla, rasa, rasa’, you can feel the thrill going trough the audience when the first notes of the song flow through the speakers. But what can you do, when you’re only with 3 musicians? Using a sample of the kockle…? This would be weird since there’s not much more than this beautiful instrument in the beginning of the song, so the notes are played on guitar and the despite the fact they try to bring the sound as closely to the kockle as they could, it isn’t the same.
Skyforger did a wonderful job this evening, their music sounded great, but I think it’s a shame the folk-elements are very suppressed in their music right now.
Rating 7.5/10

Månegarm
Månegarm is moving in the opposite direction, their latest album ‘Månegarm’ is the most folkiest of all their albums, sometimes even less metal! Wow, what would they bring on stage this evening.
They took off and sounded solid as a rock from the start. The audience swallowed the first two songs quite enthusiastic, and decided they’re were in for a party this evening, so when the Swedish guys decided to throw their third song at us, hell broke loose and a mosh pit was started which would kept on going for almost the whole concert. The band had a very nice solution for all the violin parts in their music, the second guitarist played the violin where it was needed the most and the rest they covered with samples. Normally I’m not to fond of the use of samples, but the band showed in this way where the violins were coming from and filled their music in with what was most needed at a certain song.
Somewhere halfway the setlist they had a nice acoustic block of two songs, starting with ‘Segervisa’, despite the fact the fans in the venue had to stop their pit-activities, they kept their attention and witnessed a band which showed they skills in this way. But then it was time for pits, crowdsurfing, headbanging and all that shit again. Song like ‘Blodörn’, ‘I Evig Tid’, ‘Fimbultrollet’, ‘Odin Owns Ye All’, ‘Sons of War’ they were all embraced by the fans and Månegarm did a hell of a job on this small stage.
Rating 10/10