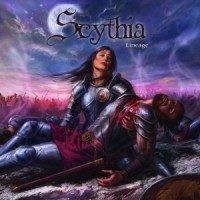 In a previous review on here done by Colin, he eluded to the fact that Canada’s Scythia seemed to be moving away from the folk metal and becoming more power metal. Well, he must be psychic because he just predicted how their latest epic “Lineage” came across to me….. chock full of power metal with very little if any folk metal.
Truth be told I don’t know if they were ever considered folk metal but that is probably for another conversation. This outfit are forging a new path for themselves with each passing album (this new one being their 5th full length since their inception) So where do they land for me comparison wise? I think a less melodic death influenced Vesperia or less folky Yonder Realm are decent but not really accurate…. back to the power metal side I instantly think Iced Earth, Lost Horizon, Rhapsody Of Fire and Symphony X and even classic rock bands like Styx…..progressive power metal not overdone with time signature changes but still more rifftastic than just plain power metal tends to be. Need further proof of their power metal connection? Jump on their Facebook page and look at their influences.. enough said. So let’s get to the album. Album opener “Eternal Oath” will make you want to grab your steel and ride into battle….a great opener since it shows everything they do in one shot…..catchy riffs, soaring vocals, melodic harmonies with keys and guitar, driving bass and drums…..yeah, it’s all here. The rest of the tracks that follow have a similar template with all of the above, some more up­tempo than others. The total album is 8 tracks at around 44 minutes which is perfect to me… not too long or filled with songs that can’t seem to find an end. A couple of longer tracks are included (“Loremaster Part I” and “Loremaster Part II” are both over 7 minutes) but most tracks are in the 5­minute zone. While I can’t say I listen to as much of this style as I have in the past, I
found this to be heavy and catchy with great musicianship and solid songs. Production is better than some of the other efforts in their catalog and showcases their progression in song writing.
So, take off you folk metal goggles for a second and give this album a good listening to… yes it’s a great metal album no matter what your genre tastes are.