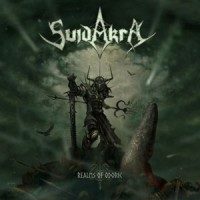 German metallers Suidakra have been a reliable part of the metal scene for more than 20 years now. Sometimes more leaning towards black metal, often on the edge of melodic death and always with some folk elements incorporated in their style. The band reinvents itself during passage of time. Band leader Arkadius Antonik manages to keep the band going with a constant level of quality. What does their newest full album bring us?

Already during the intro you recognize the sound of Suidakra by the bagpipes they often use. The harsh, yet understandable vocals of Arkadius (why don’t you reverse his name and see what happens) in ‘The Serpent Within’ will make you feel right at home. Nothing wrong here, people. But, of horror, after a minute into the song, clean singing! WTF? Let’s not panic too soon, but it won’t be to everybody’s taste. I certainly prefer the harshness. No harm in straying from the beaten path, though.

‘The Hunter’s Horde’ is Suidakra at its best. Storytelling, double layers of vocals, a full sound, pounding drums, midtempo as well as speedy parts. Accessible and typical Suidakra. Enter the guitar solo, room for the drums to shine. Very nice stuff indeed.

‘Undaunted’ brings back Tina Stabel, who we’ve heard on several previous albums. Her rock voice is pleasant enough, even if the song itself is not very interesting. And it takes some effort not to listen to the German accent.

In fact from here on, the album is growing a bit thin. I notice my mind wandering while listening to the second half of the album. Still, all the Suidakra elements are to be heard. Melodic guitar lines, variation in speed, Arkadius’ recognizable vocals, Tina here and there. So what’s wrong? We’ve heard it all before. It’s a good thing most of the songs are between 3 ½ and 4 ½ minutes. Therefore the songs in itself are not boring in any way. The album as a whole in the end, is. I wouldn’t go as far as accusing the band of having a lot of fillers om the album, but the standard clearly drops towards the end. Maybe, just maybe, the album will grow in time. Apart from ‘The Hunter’s Horde’, I can’t see any of the songs make it on the Greatest Hits album when the band celebrate its 25th anniversary