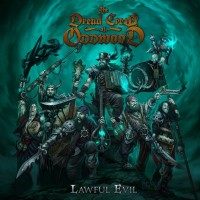 ‘Lawful Evil’, The Dread Crew of Oddwood’s 4th album is again full of Heavy Mahogany, this was by the way the title of their previous album. What the Hell is Heavy Mahogany??? I can image you would probably ask yourself and anyone else in your local pub. Well, seems to be wood but heavy. Thinking of an honest piece of wood, you will probably think of acoustic songs. Not? Well drink another pint then.
Well I drank enough, sooo I can explain you, The Dread Crew of Oddwood is playing Acoustic Folk-metal. Seems to be a contradiction, but they’re doing a fine job with their music.
The theme of the band is Pirates, a bit in the Alestorm style. There’s lots of humor in their lyrics, which makes it a contagious mix with their often merry tunes. And while they may remind you sometimes of a band like Alestorm, there is little in common with that band. The compositions are written and played by a bunch of very skilled musicians, using their talent to entertain you with a their nice merry sound. The songs seem to be acoustic versions of loud metalsongs, but they’re not, the songs are meant to be this way, and I think they’re at their best this way. Although I can imagine, some pirate-metalbands covering their songs in a metalway in the future.

The Dread Crew of Oddwood really surprised me with their sound and this album ‘Lawful Evil’ is a good one to expand your collection with. When you’re into the pirate themes, this is a band with a totally different approach and they’re doing a very, very good job.
This is really an album you should listen and I can imagine many metalfestivals like to have this band to create a nice different slot in between the other bands. Just like a lot of German festivals have Feuerschwanz as an nice intermezzo, The Dread Crew of Oddwood can fill in this niche in the States, but in their very own Heavy Mahogony way.

The Dread Crew of Oddwood