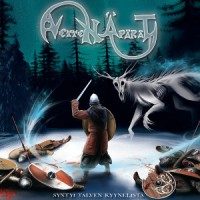 Just when you may have thought Sweden had a bunch of the top spots filled this year with Amon Amarth, Grimner and Utmarken, we may all have forgotten about Finland… then we get the new Moonsorrow album, new Kivimetsän Druidi EP and now the debut album from Vetten Äpärät comes out, going to be a fight to the end.
I know I heard a single from them last year with “Sydäntalven Viha” (“Heart Of Winter’s Wrath) which was certainly promising and is included here on the debut. They have put together a collection of 13 tracks on their debut showcasing numerous facets to their style and sound. Of all the Finnish exports, I think an Ensiferum comparison would be the closest (specifically on tracks like “Sword Dance” and “Exile”) but they do have a mixed bag of a majority of the bands from there with some of the tempos and keyboard stylings of Finntroll, some of the dirgeyness of Moonsorrow and so on and so forth.
“Syntyi Talven Kyynelistä” (I’m going to say “Born In the Winter Tears”) has tracks shorter than a minute and a couple over 7 minutes, some are just spoken word/instrumentals to help propel you into the next track. I don’t think they are filler tracks but you certainly need to listen to them in the context of the album for them to be more appealing.
Being a 6 piece affords them a little more flexibility in terms of song writing/style and they do show that to some extent here with lead vocalist Sami doubling on flute on occasion and having two dedicated guitarists (Aleksi and Leo). (Jarmo-Bass, Anton-drums and Irene-Keys rounds out their lineup) Tracks like “Ice Made New Kingdom”, “Grief Of Woods” and “Winter Darkness” may be a little more diverse than the rest but not too much (and yes there does seem to be a winter centric theme to a lot of their tracks) as they still have a similar sound to the others. There is a ton of face smashing beats/riffs here to get your pulse accelerated and want to charge the shield wall but with some other slower stuff on here too. For a debut this is a pretty finished product (no pun intended), considering they have been in existence since 2007 and this is a debut I would suppose it had better be.
The production is decent and solid with the right amount of distorted guitars and bass, keys in the right amount and drums pounding with vocals blended in. Maybe not super creative but if you have a semi-formulaic thing that works then go with it especially on a debut…..the next album should probably allow them to spread their wings a little more.
If there is such a thing as a 2nd wave of Finnish folk metal, these guys and gal will be part of it for sure… A great debut and an enjoyable listen throughout.