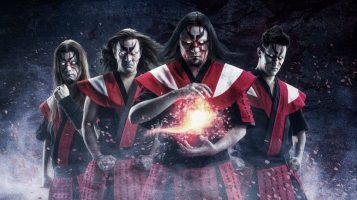 Consistency: the word which defines Whispered. Two years after the incredible Shogunate Macabre, they’re back with another great álbum: Metsutan – Songs of the Void. The Finnish band didn’t disappoint and the high level continues.

The unexpected blend of death/power metal and Japanese folk elements makes Whispered unique. The atmosphere is incredible, sometimes insane. Every element is really well integrated.
The instrumental “Chi no Odori” opens the album and… “Strike!” in your face! The “Exile Of The Floating” the best one for me. Even more fast and impressive than the previous one.
In fact, is very hard to find the highlights here. Every song have his own peculiarity… even a saxophone you will find. And as I said, is really consistent album.
“Warriors of Yama” is other instrumental one, and makes you feel in a path to the underworld. Yama is a god of death (at least according with Wikipedia).
“Bloodred Shores Of Enoshima”is an epic song with almost 12 minutes and closes the Finnish samurai’s album. Enoshima is island in Japan and is dedicated to the goddess Benzaiten, the goddess of music and entertainment. According with Japanese mythology, the people of this island was screwed by a five-head Dragon. This history inspire this song and the album artwork as well.

Whispered found their own niche in a saturated style. Impressive.