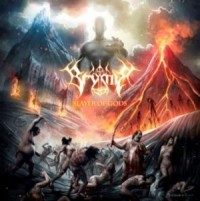 Yet another band that has taken an extended break and returned in 2016 is Finland’s Brymir (need I remind you of recent releases by Talamyus, Kivimetsän Druidi and SIG:AR:TYR with their 5 plus year disappearingi acts?) Well at least it is a triumphant return with their new opus, “Slayer Of Gods”.
Having revisited their debut (2011’s “Breathe Fire To The Sun”) I could definitely see/hear the potential but knew there would have to be something to differentiate them from the masses. I feel that “Breathe….” played it pretty safe while still being enjoyable if not super memorable. “Slayer Of Gods” turns up the symphonic and epicness along with the tempo and heaviness to create a really good 2nd album. If I had to compare them to a band from Finland I would say Ensiferum for sure but definitely more symphonic based tracks with soundtrack and power metal influences……. maybe some Yonder Realm, Vesperia, Dragonforce and Rhapsody Of Fire in their too? Whatever the blend is, it works as it crosses into numerous genres from track to track. I think there was a lot of thought given to how the tracks flow one into the other with fade ins and fade outs from one to another to kind of give it a little bit of a concept album vibe. “Slayer Of Gods” is overflowing with blast beats and double bass, guitar riffs and solos, keys, screams and killer orchestration……. check every box on your “must haves” on a killer album worksheet.o
Opening track (after obligatory intro) and first single/video “For Those Who Died” sets the pace and the foot doesn’t come off the gas of the nitro fueled engines for the first four tracks until the instrumental “Prelude”. Brymir then enters into the 8+ minute title track which is the crowning achievement for them to date. While not as breakneck as the rest of the album, the restraint and build of the song is monumental and propels the remaining tracks forward, sucked up in its vacuum into the stratosphere.
You can definitely get caught up more in this track with the tempo not as frantic and the length being more conducive for being immersed into it. The remaining four tracks go back into overdrive until the end of the album. Can they constantly do this style going forward? Well, yes I am sure they could but it does tend to get a little monotonous with most every track being super tempo driven. The musicianship is certainly there, solid production and all of that….just a little more diversity would serve Brymir well. I can’t really say there is any folk here but power, melodic, symphonic, heavy, fast and all types of metals are covered for sure. Set the control for hyperspace, Brymir are aiming for infinity….. good album.