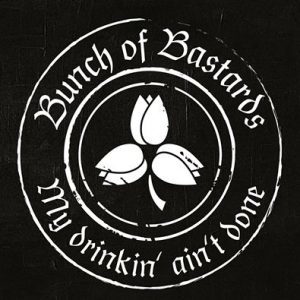 The Dutch band Bunch of Bastards has released your debut album “My drinkin’ ain’t done”. The album has about fifty minutes distributed in 14 tracks and including a nice cover from the traditional Irish Music “Whiskey In The Jar” (yeah yeah that one ruined by Metallica and most of you no longer want to hear covers – I suppose).

The album begin with “Lucky Break” with a nice mandolin track. I confess that the Cor’s vocal didn’t please me in the first listening… perhaps because I didn’t expect it so low, like a bass. But was only the first impression and the vocal has turned in highlight during the audition.

The best songs are “My drinkin’ ain’t done”, “Katuska Kalashnikova”, with an eastern European music style; “Sky Over Rotterdam” which tells about the German attack in Rotterdam during the World War 2, “Michel Malloy” and the drinking song “Many a Good Reason”… to drink many a good pint! Yeah!

“My drinkin’ ain’t done” is a nice debut from Bunch of Bastards. The bland clearly wants to present something new and different inside the style… and they did it!