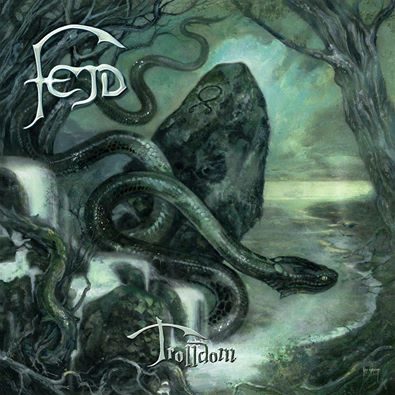 Pretend for a moment if you will that you have never heard a single Fejd song at all… maybe for some of you it is possible you never have. For those of us in the know, Fejd are about as close to a definition of “folk metal” as it gets, maybe a little more on the folk side. With the pending release of “Trolldom” the blend and balance is closer than ever of equal parts metal and folk while retaining their core sound. “Trolldom” is their 4th full length and this Swedish troop have probably put together their most complete and heaviest opus to date.
I know it will be hard to believe but there are some tracks on here that I would say are almost all metal with very little folk…… I know, impossible to comprehend. I think they have landed somewhere between Utmarken and Grimner on the folk metal chart of Sweden for me. Incorporating more distorted guitar and heavier riffs/vocal melodies is making for a wider range of appealing album from Fejd. Do I love the other albums? Of course, but to hear some additional facets to their sound is beyond killer. First track on the album is the single and video “Härjaren” which should have been a pretty good indication of where they were headed, catchy guitar riffs with folky touches and keys, nice combination of all things in their arsenal. From there you will be treated to a mixed bag of some heavier and some simpler more folk based tracks, waxing and waning back and forth from track to track. I think the heavier tracks tend to stand out more for me as they are just tend to grab me more, tracks like “Hednaland” and “Glöd” have tons of shredding and heavy guitar including the solos with all of traditional folk instruments too, what is not to like? All of their stuff is awesome but just made even more awesome with the commitment to the electric guitar more on this album.
For those out there that had waited for them to break loose from the chains and go heavier this is your dream come true. Imagine what some of their previous albums would have sounded like with the heavier guitar sound? Yes, it is almost impossible to comprehend how off the charts epic it could be. There will be some detractors out there about how Fejd have possibly left their roots and altered their sound but I don’t feel that is the case, if anything they are still the same with now a heavier side to show off.
Fejd have yet to take a bad turn in their career thus far and I would probably brawl with anyone who doesn’t get into this album for being more metal based this time around. An amazing album from Fejd and one that I know will be in heavy rotation for me for years to come.