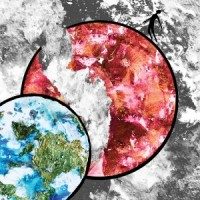 When I think of Minnesota, I think of brutally cold winters and brutally cold music by the likes of the mighty Amiensus, Nuklear Frost, Ashbringer and of course, Oak Pantheon. While there are some other amazing musicians from the Gopher State such as the vastly underated Hüsker Dü, and more well-known ones such as Prince and Bob Dylan, I first and foremost think of grim purveyors of black, frozen anthems and no one brings on the ice age like Oak Pantheon.
Has it been almost 4 years since the classic “From A Whisper” came out? Time flies I guess…..at least they have released some singles and splits since then to keep us anxiously waiting for the next opus. First off, someone has to come up with another term/genre for this style as I don’t think “black metal” is apropos……” dark metal” or “gray metal” work better for me as there are not the evil, satanic overtones I personally associate with the genre. I don’t think anyone would confuse a band like Agalloch or Windfaerer for Watain anytime soon but I digress……let talk about how mind-blowing the new Oak Pantheon is. I don’t know if this really is an album we would normally review but we have been getting a fair share of this style and I am all about it. I believe a lot of this style of album tends to be more introverted and thought provoking and “In Pieces” is as metaphysical and mindful as any album you will hear in any genre. The wall of sound they create right from the start with “Dawn As A New Day” is dismal and uplifting at the same time. To blow your mind even more is that there are officially only two members of Oak Pantheon (Sami Sati and Tanner Swenson) performing all instruments and vocals……I guess a comparison to Wolves In The Throne Room or Forefather could work here. There is a nice blend of shorter tracks (4-6 minutes) along with 3 tracks topping the 11-minute mark for a total playing time of over 64 minutes.
There is a lot of “baring the soul” tracks here and I certainly hope you get in touch with the lyrics along with the music. From subject matter as diverse as consciousness (“Grasp The Apparition” and “Pavor Nocturnus”), adversity (“Enormity”) finality (“Dawn As A New Day”) and the struggle against internal and external foes (“Climb” “Float” and “GodSon”), the lyrics are as heavy (if not heavier) then their grim and/or clean delivery. With the right amount of dirge, chaos, thrashing, plodding, industrial, semi-progressiveness and shrieking, Oak Pantheon have placed it all in the hands of the fates. Not to be overlooked in all the easily seen and heard is Sean Golyer’s contributions as the third member “behind the scenes” from a mixing and production role.
The album has the right amount of ferocity and clarity, balanced and heavy and is intense at all levels of listening. With gloomy, dreary wet weather we have had here recently, “In Pieces” is the perfect soundtrack for it……but with the sun now shining it is perfect for that too. Great album.