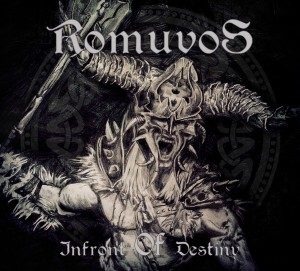 Lithuania’s Romuvos have already released their 2nd epic album entitled “Infront Of Destiny” and we are now fortunate enough to now review it. I mentioned recently how there was a sore lacking of folk metal from Lithuania and luckily projects like Romuvos and Juodvarnis are changing all of that. Prior to delving into the new album I went back and listened to their debut “Romuvan Dainas” from 2014 (“Romuvan Songs”, Romuva being the pre-Christian religion prevalent in Lithuania). If you can’t hear the Viking-era Bathory/Falkenbach connection then I don’t know what you are listening to…..mid paced epic dark metal tracks. I could even say a little SIG:AR:TYR, Oakenshield or Summoning on some level but the Bathory and Falkenbach comparison are definitely more accurate to me. I know there are some people out there that can’t get into this style for some reason as it can get a little sleepy as there is not a lot of variation in tempo or style.
“Infront Of Destiny” keeps the basic template of the first album and adds some folkier and acoustic instrumentation and variation in style and tempo, definite growth in terms of songwriting and overall direction. As far as one man projects go, Velnias is the real deal…..all instrumentation including drums (not drum machine) and vocals……very impressive. There are a total of 11 track (10 plus outro) with the range in length being between 5-8 minutes’ long. Tracks like “Winds Blow Over Seas”, “Our Spirits Pass Through The Underworld” and “Golden Coasts Filled With Amber Stones” show a different side to the Romuvos sound and stand out amongst many others.
From a vocals perspective, I think Velnias reminds me a lot of Heri from TYR (at least some of the older material) with a semi-baritone delivery that at points are layered on top of each other, creating depth and texture. There is definitely a progression in terms of the Romuvos sound and that’s what is awesome about music is hearing the growth of an artist. While “Romuvan Dainas” was epic, to do a “Romuvan Dainas Part Two” would have been a tough listen. Velnias has used the first album as a stepping stone to “Infront Of Destiny” which seemed to be logical and on the right trajectory.
A solid album throughout, including mix and production which is heavy and inviting with the focus on vocals and making for an enjoyable listen. One man projects can sometimes stagnate with lack of outside influence and get really tired, really quick. Romuvos seems to have a path and direction for years to come with “Infront Of Destiny” being the first steps on that long journey ahead… great 2nd album.