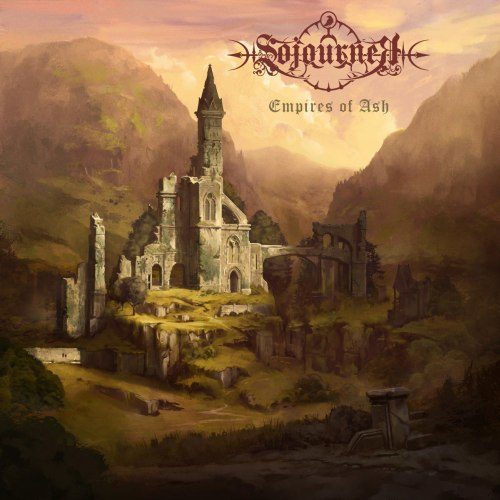 Halfway thru 2016 and I have already said this is greatest year in folk metal EVER and to further cement my argument is the debut from Sojourner entitled “Empires Of Ash”. Consisting of members from various countries (wait for the interview) Sojourner have put together a pretty epic album of 7 tracks ranging in length between 4 ½ and 12 ½ minutes.
This has officially been released by Avantgarde (hello Ashbringer and Selvans amongst tons of other awesome bands) on May 25th. Who do they sound like? I personally think Saor is a decent comparison but not as straightforward…. maybe the awesome Duskmourn or Summoning would be closer? I even hear guitar sounds reminiscent of Woods Of Desolation to me. This is dark folk/epic/symphonic/black metal all in one. Opening track “Bound By Blood” will show what direction they are heading in from start. Intro keys into blast beat drums and shredding guitar and blackened vocal and it just gets better from there. You may be familiar with “Heritage Of The Natural Realm” as it was released last year as a single and that is where I first heard them. With the mournful piano into whistle and the half time feel, it shows a more restrained side but don’t worry there are some blast beats coming. “Aeons Of Valor” follows the same template and then into “The Pale Host” which shows yet another side with Chloe Bray (guitars/whistle) taking lead vocal role from Emilio Crespo and is more symphonic and keys based with no percussion/guitar…..a nice interlude and change of pace. “Homeward” is back to the heavier stuff as are the remaining two tracks (“Trails Of The Earth” and the title track) Guitarist Mike Lamb and bassist Mike Wilson (not the Mike Wilson on Bass from Isenmor…. pure coincidence) sound like seasoned veterans of folk metal on every track with Mike also handling keys and drumming duties (real or programmed doesn’t matter) I feel there is enough of the folk instrumentation with Chloe’s contributions on whistle and Mike’s on keys to satisfy you die hard folksters out there. “Empires of Ash” will also appeal to those looking for heavier, blackened tinged metal. The mix and production are super solid with a thrashy guitar sound, powerful vocals and percussion in equal parts and all instruments sounding natural and in their proper space. In 2014 when Duskmourn released “Legends” I had to make my top 10 a top 11 list for the year. Luckily, Sojourner has come to me earlier in the year and is definitely a contender for debut of the year as well as album of the year for me….. time will tell. Fantastic debut from Sojourner.