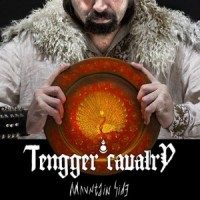 China really is conquering the world. Two months ago we had a review of Black Kirin and now their fellow countrymen Tengger Cavalry have a go. And what a busy bunch they have been. In their six years of existence Tengger Cavalry have released a full studio album every single year, a compilation album, a split CD, two live albums and this is their second EP! That’s more than most bands release in their entire career. The band is being called the saviour of Pagan metal. That may be highly exaggerated, but they do bring new ideas in a style that’s not particularly known for its innovation.
Eleven parts on this EP. Parts, not songs, seeing that the intro only lasts 43 seconds. Immediately the intro makes clear this is an Oriental band. The Igil being the most special instrument to be heard throughout the EP. First real song ‘Mountain Side’ shows it all. Throat vocals, accompanied by clean background vocals, heavy riffing, short melodic guitar melodies and very distinct Oriental melodies. It’s not slow, it’s not fast, it’s not ultra heavy. It is original, it sounds authentic, it’s different. And it will stay in your head for a while, if you listen to it a couple of times. Skilful song writing. ‘War Horse’ is a song that has been released before. Several times actually. And that is where I become confused. What’s the purpose of this EP? Except for ‘Mountain Side’ there is not really anything new on this record. Yeah, a bit of jamming on the end. And further more versions of  ‘Mountain Side’ and a live recording of ‘Tengger Cavalry’. Is this clever marketing? Releasing as many records as you possibly can, hoping that something eventually will stick? I am not sure that’s such a good idea. Even a brilliant musician like Devin Townsend releases too many music for my taste. Then again, what do I know about marketing?
The music is interesting enough. If Tengger Cavalry would release one album every two  years, I think the best ideas will lead to even better music. Seeing that the band does not apply this standard rule, they probably will keep on smothering us with many more releases over the next years. And we probably should be happy for that. Because in the end they will have a great set of songs to bring live. And I can only hope the Oriental circus will come to Europe. Bring us a joint concert of Chtonic, Black Kirin and Tengger Cavalry and I will be the first to buy a ticket.