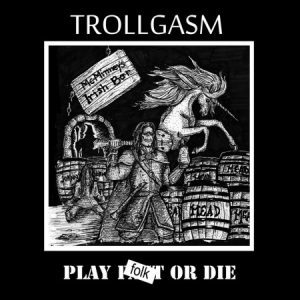 There are 3 main reasons that the new Trollgasm EP rules… and they are:
1) It’s a Trollgasm release and they all rule
2) Jesse from Yonder Realm and I both do backing vocals on it plus numerous other guests
3) See 1 and 2
For total transparency, both Tim Read (vocals/guitar/folk instruments) and I are involved in two music projects together (Rannoch Moor and Penetrated) and we met thru my enthusiastic passion for all things Trollgasm. Meeting one of your heroes is one thing….. being involved in two music projects with one is a dream come true for sure. So I will try not to sound like too much of a fanboy here haha.
First I would call this an EP (7 tracks in total….2 previously released) and it is pretty much a party fest from beginning to end. I had to think for a nanosecond about what was the last new thing Trollgasm had done before this and it was the EPIC collaboration with Wulfstan from Forefather (“Quest For Honour”) for the “Tales From The Southern Realm” compilation. That track is one of the two sides of Trollgasm, folk and thrash tinged swamp metal on one side and boozed fueled folk brawls on the other. This EP features more of the latter than the former. If you need to put Trollgasm on the map I would say Svartby, Vorgrum, Drakum, Leshak, SatanaKozel and Lepoka are all favorable comparisons, swampy not too serious thrashy folk metal. After the obligatory intro (“Oh Johnny”) which is not an instrumental as much as it is a throwback 50’s kinda doo wop teaser. Then you go right into the two previously released tracks “Liquid Black” and “Mead Fiend” which have been reworked here a little bit.
Jesse from Yonder Realm lays down backing vox on “Liquid Black” while I expertly craft backing vox on “Mead Fiend”……both tracks are super catchy and punch you in the face in under 3 minutes. “Party At McMinney’s” is yet another ode to boozing and partying then right into a surf rock song turned folk metal track “Swamp Swagger”…. reminds me of a Beach Boys track on a 3 day bender and calling out on Monday with a massive hangover. “Grace’s Pudding Polka” is an ode to violinist Grace and has just about everything you could possibly throw into a folk metal instrumental…..every type of whistle, ocarina, kazoo and too many other instruments to mention. EP closer is the title track and the only serious one of the bunch, more akin to a lot of the tracks on their epic album “The Northern Winds”…..heavy, punchy and no messing around. Dana from Yonder Realm appears here as well as other guests like Reuben from Stormtide, my bro Adam from Penetrated and Jake Seller….a real team effort all around. Look I am going to listen to this thing probably every day for the rest of the year since I am all about Trollgasm.
Why did I only give it a 9? Well it’s not enough and I hope a 9 will encourage them to release some more songs soon, sorry Tim I fan boyed this to death, another great release from Trollgasm.