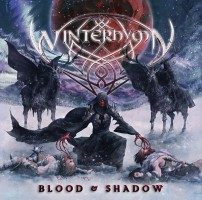 In a genre where most bands come from Scandinavia and Eastern Europe, it’s nice to notice bands from more and more countries. China is up and coming, the scene in France is far from dead and once in a while we get some proper folk metal from the US of A. Not surprising that from a country that’s only recently discovered by the white man, folks, myths and the like are rather rare. And there is some Native American metal, with bands like nechochwen, but there aren’t many of those bands yeat.
Second full album from Ohio based Winterhymn will try to convince us that you don’t need ancient history to make worthwhile folk metal. Did they succeed? Yes, sir.

First let’s check our metal checklist. Do we have distorted guitars? Check. Pounding drums? Yep. Harsh vocals? Yes. Okay, let’s move on to the folk metal part. Folky melodies? There. Folky instruments? Yes, partly from keyboard, but also from the good old violin. So now it’s time for our nice or not so nice check. Enough speed? Yeah. Variation? All songs have their own character and within the songs speed varies and harsh and clean vocals vary. Originality? That’s slightly harder. Maybe it’s rather unique to hear the English language once more, but that’s hardly an accomplishment for an North American band. Let’s put it this way: every sound in itself is not unique, but the album ass a whole is brought so convincingly that non-originality is hardly an issue.

Style wise you can think of throwing folk, Viking and power metal with a hint of pagan in the blender. The result is rather accessible powerful metal. Sometimes the bombast rules and the keyboards are in the front of the mix. Not the most dark form of folk metal ever made. A song like ‘Legacy in Flames’ will very likely make you want to raise your horn. And when your thirst is quenched, go on, go look for a mean old dragon to slay. The songs are not too long, another sign that the band knows that we listeners are easily bored.

So, yes, this is a worthwhile album. Not ground breaking, not my new favourite band, but thoroughly nice. Except for the soft song Seafarer. That’s hardly memorable. But otherwise: yeah, nice.