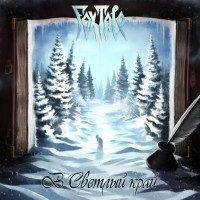 What do we know about Foxtale? Not a lot really. We do know that they are a bunch of Moscow based folk metallers. This is their debut EP, containing an intro and 3 full songs. An intro on an EP, is that wise? It can be, to set the mood. And that is exactly what this intro does. It shows the band is capable of making interesting instrumental music for a minute and a half. Now that we have heard metal instruments as well as bagpipes and a little moody (Georgian?) choir, bring on the real songs and show us what you are made of.
Highlight of the EP without a doubt is ‘Probuzhdeniye’ . Midtempo, nice heavy riffing, clean vocals, Vikingy, ready for battle, sung in Russian, catchy melodies. The clean vocals make the band stand out from what is usual in the scene. The singer is good at what he does, but he lacks a bit of power and aggressiveness. Not bad at all though. Having heard this song, you will be looking for bands to compare them to. And that is were it gets a bit tricky. Because Foxtale either deliberately chooses to have the strategy that they play all sorts of folk metal, or they lack direction. How so? Well, second song ‘Golodnyy Troll’ has Korpiklaani written all over it. It’s sort of the Russian version of ‘Tequila’. Makes you want to dance, drink and sing. Nothing wrong with that, it only makes you wonder what
choices the band have made, if any.
Closer is ‘V Svetlyy Kray’. A slow song with dominantly acoustic instruments. Not a ballad by any means, just a tranquil bit of folk music. Vocals are too much in the front in the mix. That’s okay if you have a great singer like Timo Joutsen of Amorphis. Not if you have a decent, but mediocre singer who sometimes has difficulty reaching the high notes. Quite a let-down after the two previous songs.
Conclusion: inconclusive, really. Foxtale has the potential to become an interesting complement in the scene. To reach its potential, the band should make choices. Compare it to a football player: if you are okay at any position in the field, you will never make the first squad. To play with the big boys you will have to bring something extra.