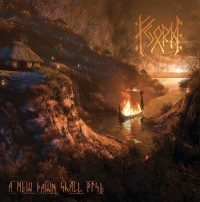 I am not sure if anyone knows who invented the split album, but I know that WolfTYR has perfected it. Last year’s compilation with Fjörd, Ravnkald and Gjallarhorn shows that this a viable way of getting more music out to the masses and introduce newer/possibly unknown bands. Such is the case with this new collection featuring two new tracks from the epic Fjörd from Canada and 8 tracks from Russia’s Drunemeton (previously known as Heresiarch Seminary).
Let’s start with the two new Fjörd tracks, both top the 8-minute mark (“One Last Flame Of Glory” and “Halls Of Valhalla”) so this may leave your jaw dropping a little compared to the tracks on the original split as those were shorter tracks in comparison. Besides the length of the tracks, you will also notice a serious upgrade in overall production as I would say a comparison to Viking era Bathory or Falkenbach is spot on. I would certainly say they seem less doomy than before and have grown more into a sound and style which delivers their message the best way possible. Mid paced, choral vocals with varied drum pattern and crushing guitar and bass tone is the Fjörd formula, two stellar tracks and presumably more new stuff on the horizon.
Drunemeton is a slightly newer in comparison with one full length under their belt (2015’s “Fullmoon Asbath”) and altogether a different sound, I guess I would call it symphonic pagan/black metal. The 8 tracks are very retro sounding in a good way, classic black metal blast beats, hell spawned vocals with chainsaw guitar and keyboard touches throughout, old Satyricon, Limbonic Art and Emperor come to mind for sure. The tracks are above average in length (most in the 7-9-minute range) so tons of music from them. Not sure if this will be something you folksters can handle as this is black metal in it’s purest form, straight from the darkness and genuine (not like a trove of commercial/mainstream stuff out nowadays). The riffing is above average and is mandatory listening for guitarists of all skill sets. I would say if this came out in 1994 you would be talking about this in the same breath as “In The Nightside Eclipse” and probably listening to it more. The production is not as squeaky clean as it could be but that does help with the overall feel in this case…sounding like it was recorded on a 4 track (again in a good way) in the middle of the woods at night.
Once again, WolfTYR shows why they are one of the premier distributors of music anywhere, defying the trends and breathing life into formats like the split which are an amazing way to discover new and different bands to check out. Once the new Witchblood and Wotanorden come out I am sure I will be spending whole weekends listening to nothing but WolfTYR releases… another epic split.