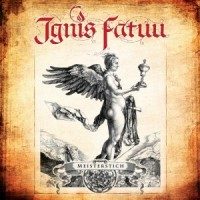 Ignis Fatuu will release their new album ‘Meisterstich’ soon. This is something which always excites me, since I saw these Germans, many years ago at Burgfolk in 2011. This concert was a very very nice one, the albums which followed weren’t bad at all, but all a bit middle-of-the-road. Never bad, but apart from a few songs, never something too get very excited about either.
The whole album is dedicated to the German artist Albrecht Dürer, who was living around 1500 and made fabulous woodengravings.
‘Meisterstich’ starts with ‘Die vier Reiter der Apokalypse’, quite a powerful song for Ignis Fatuu, the somewhat polished sound of Ignis Fatuu is there at once, but it’s in harmony with the slightly heavier sound, sounds nice, I like it.
The second track is about the engraving of Albrecht Dürer, and maybe you will punish me for this, but I like the Ignis Fatuu song better then the original engraving. The song has a nice speed and the flutes interfere nicely with the nice melody.
The band tells a story based on a piece of art, they even manage to create a whole song about the engraving of a Rhinocerus. Maybe not the best song of the album, but it has a funny touch. The same goes for ‘Die wunderbare Sau von Landser’ a pig with 8 legs and 2 bodies and only 1 head, a track which doesn’t only have this funny touch, but is also filled which the sounds of authentic instruments. The band is famous for the use of these instruments and despite the fact Alex has left the band, there’s still a lot to enjoy, Irene plays Flute, Bagpipes and Shawm. The slightly heavier sound is a great find, which makes their music much more attractive.

I can only give you the advice to travel through the works of the medieval mastermind Albrecht Dürer at least one time. Best way to consume his masterpieces is the music of Ignis Fatuu. It’s easy to do, put on this new album ‘Meisterstich’ and while listening, just copy/paste the titles of the tracks in your search-engine and enjoy the engravings.
This approach makes this album a concept-album, but you don’t have to listen to them in a particular order, you don’t have to listen to the whole album neither, because there isn’t an overall story. Ignis Fatuu just takes you along on a trip through 13 beautiful and old engravings, a nice approach and a job well done by Ignis Fatuu.