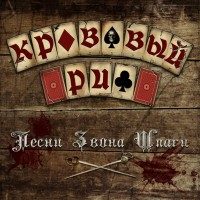 Looking for catchy folk metal from Russia? Look no further. Debut album from Krovavyi Rif is guaranteed to bring a smile to your face. If you don’t mind a bit of tongue in check, you should check this band out. They are rather hard to find, but I wouldn’t be surprised when they become better known thanks to this album.

After a mood setting intro Krovavyi Rif bring us eleven songs and an outro. Sung in Russian, mostly gruff but clean vocals. Each song stands on its own and there is enough variation to keep wanting more. I have to review the songs by number, I’m afraid. Second and third song make clear what you are in for. Think campfire, kegs of beer and mead, tough men and wild women. The use of folk instruments is there, mostly accordion. A piano on the fourth song show that the band does not restrict itself to the ancient rules of folk metal. On song nine we are even treated to some brass instruments. Female vocals on song five add a nice touch, although the song itself is a bit on the soft side for most metalheads.

One of the best things on the album is the catchiness of vocals as well as guitar melodies. Sometimes it borders on the edge of being too funny. And when a stand-up comedian cannot be funny all the time, the band understands listeners want to have a decent piece of metal alongside the drinking songs. The sixth song reminds of the theatre. In fact there is a little piece of Can Can involved! In other parts of the album you may find a bit of Alestorm and a bit of Viking metal.

Most songs last between three and five minutes. That’s exactly what you want. The lyrics are in Russian, so I can not understand a word of it. I am pretty sure though that the themes are battle and drinking. As the album goes on, not all the songs are equally interesting. Song number nine will be too cheesy for most of us. And song number ten is melancholic, but the emotion does not come across very convincing. Song number twelve is a ballad the album does not need. It might work at concerts, though. But it would have been better to make an album slightly less long, keeping the truly good songs and dismissing the rest.

In the end, Krovavyi Rif have made clear choices what they want to be. A party band within the folk metal scene. And they are good at it. Good production, every member knows his place and performs fine. I like.