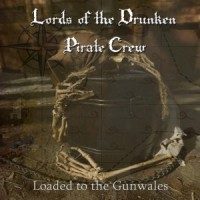 First off, I will tell you I am not a gigantic fan of “pirate metal”. Sure I can appreciate Alestorm, Lagerstein, Swashbuckle, Dread Crew Of Oddwood etc but it is probably not my “go to” listen as far as a folk metal sub-genre.
The debut Lords Of The Drunken Pirate Crew album may change my mind on that. Hailing from Chicago, USA, this troop of rum swillers have put out a scurvy dog of a plank walking album here…. alright enough of the pirate talk. “Loaded To The Gunwales” crushes on numerous levels not just the obvious pirate one. I guess my main reason I like this as a pirate album is that it is not so overtly pirate as some can be……trying much too hard to push a buccaneering agenda and not just writing killer tracks. Comparison bands? I would compare them to bands like Trollgasm, Vorgrum, Svartsot and Trollfest…. sense a trend here? I think they have a very thrashy troll metal sound but they add on the pirate stuff in heaps with keys that sound like accordion and bagpipe with flute and whistle as well. Every track is super up tempo and heavy with breakneck riffs and drums with full throttled lyrics to boot.
There are a total of 12 face smashing tracks (1 intro piece and 11 regular tracks) averaging a few minutes in length which is the way it should be….pounding track after pounding track like a tidal wave. As pirate laden as the tracks are title wise, they are not painted into a corner style wise. Check official first track “Yo Ho To The Gallows” which has clever and shredding guitar right in the start and drops the anchor right on your skull. This is followed by blast beats, whistles, shrieking vocals, keys…..a treasure trove of goodness. Guess what? Every track is like this, filled with everything from double entendres in the lyrics to thrashy riffs and everything in between. Tracks like “A Pirate’s Life For Me “ is more overtly pirate with the chorus and all. Sonically this is much improved from their 2014 promo that I had and “Loaded….” has two of the three tracks here (“Yar Har Hey” and “ Woken From The Crows Nest”) in redone versions. Instrumentation is layered nicely and the acoustic/key parts stand out when needed making this even more enjoyable.
As debuts go, this is probably in my top 10 for this year and was a nice kick in the pants for me to start listening to some pirate metal again. So time to raise the Jolly Roger and hoist the sails for grog swilling, plundering and more grog swilling. Great debut album from LOTDPC!!

Lords of the Drunken Pirate Crew