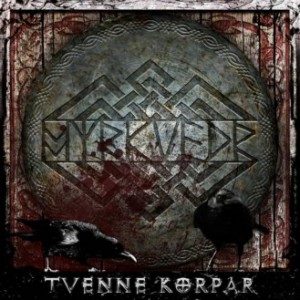 The mighty Myrkvedr have returned after a brief hiatus with a new 4 song EP entitled “Tvenne Korpar” (“Two Ravens”) following their 2013 premiere full length “Sons Of Muspell”. Will this new EP mean they are back up and running? Not sure yet but let’s see what happens and be happy we have 4 new songs to check out. Clocking in at around 18 minutes or so, this Swedish horde still has the same style as previous releases and better production/sound as a bonus. I think they sound like a less folky version of Grimner or less death metal/more folky version of Amon Amarth without all the death metal acrobatics…. I could even say some Baldrs Draumar or Varg here and there.
Myrkvedr flirt with numerous styles in their songs which is definitely ok as they still sound like Myrkvedr. Opening track “Pagans of The North” has some nice tongue in cheek lyrics along with the barbarian riffs and some dancing flute…solid track for sure. Second track “Sindres Saga II War of the Smith” is a little heavier and more in your face then the first track but equally likable. Third track “Crystal Skies” is a little more accessible, maybe would be considered the single off of this release but still heavy too. Closing track is the title track which is by far the heaviest, darkest and fastest of the EP and closes it on a high note. Sadly, this may be there legacy with these possibly last four songs which I certainly hope is not the case but only time will tell.
This is a nice snapshot at Myrkvedr in only 4 songs and you should run back and grab the full length. Now grab your drinking horn and hail the ancient ones in hopes that they reform more permanently to keep creating some more solid tunes like these….. nice EP.