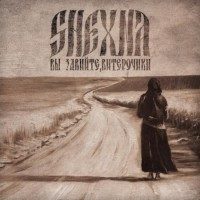 When I saw that we had a new album from Shexna to review I was not sure If had heard them before until I jumped on Bandcamp and remember hearing their 1st album there. So this is album number 2 from this Russian crew (now on the mighty Soundage label) and it is definitely a better album then the 1st one in many respects.
Entitled “Вы Завийте Витерочики” (I am open for any interpretation of this….) the new album features 8 tracks totalling around 50 minutes or so with most averaging 6 minutes in length. I have heard them being described as doom/folk which I don’t think is really accurate because I don’t frankly think they sound that doomy…. very plodding yes and methodical sounding. They use some pretty dissonant chords and are not up tempo for the most part so they compare favourably as doom but not really. The one band they remind me of the most I would say is Solstafir and maybe even a little Thy Worshiper but that is only on some occasions. There are some nice interlude and folkier passages to break it up which makes for a decent listen and I think the more folk instrumentation they use (namely flute and acoustic guitar) the more successful they are. When those instruments are not in the mix, they tend to sound like a run of the mill metal band since they tend to not be up tempo tracks and that is where those doom descriptions certainly creep in.
Overall this is a pretty solid offering especially when they build from softer into heavier passages, layer the vocals with main and backing chorals and employ more folk instruments into the tracks. The longer tracks here tend to hold my interest more as well. A decent 2nd album certainly more to my liking then the first and one worth checking out….