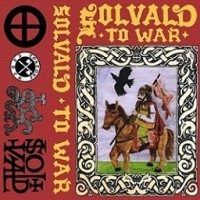 Go ahead and look online for information about Sweden’s Solvald and you will be looking for a long time with little to show for your efforts. Well, except for their Bandcamp page which is where you will find this epic release entitled “To War”. There are only 4 tracks so I am torn as to whether to call this an EP or an album as two of the tracks exceed 10 minutes but I would say an EP seems more appropriate. I am not sure what sub-genre of metal I would call this if asked, but doom, medieval and black metal all come
to mind when listening to this. Think of a mix of Primordial, The Flight Of Sleipnir, Thy Worshiper and Bathory and I believe you will hear a connection to the Solvald sound with that blend. How about an opening track that is almost 20 minutes long? Normally I would say this is probably a little daunting but “Fields Of Blood” is an EP opener to end all openers with a plodding way about it and a build up for the ages.

The style is very hard to pin down as it isn’t over the top super heavy but also is at the same time….contradiction? Yes I suppose so but it has a very subliminal hypnotizing way about it bordering on soundtrack with spoken word and sound effects throughout…..I wish I had lyrics to clarify the track more but a killer listen nonetheless. If you like the opening opus you will like the remaining tracks as they have a similar tonality to them albeit in smaller doses. “Iron Forest” is a little more “in your face” I would say by comparison but has a lot of the same trademarks as “Fields….” Third track “Forging The Firesword” is
the shortest (just over 2 minutes) and has the folkiest sound of the bunch by way of mouth harp…… I would call this an instrumental more or less except that there is vocals via chanting here. The fourth and last track is “Valhall, The Hall Of The Gods” and at over 10 minutes adds a little more diversity with female spoken word and has a Wardruna vibe to it with acoustic and traditional instrumentation, hard to place exactly what it is plus some blast beats….yeah they have that style about them too. With 40 minutes of music, this is a really unique and different release and one I thoroughly enjoyed listening to.
A next release sounding the same may not bode as well as maybe some diversity might help, but for now these four tracks are pretty killer. The recording is better than OK with a shrill guitar tone over IIII fuzzy instrumentation and cavernous vocals which helps sell the whole package. If you look at the album cover you may think this is just another amateur release but nothing could be further from the truth. Solvald have a different style which is hard to peg down and define….usually the hallmark of some of the best bands out there that have no equal…..great first release.