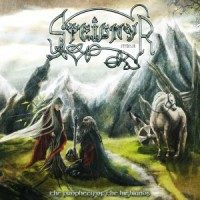 Steignyr has released a second full length ‘Prophecy of the Highlands’ this year. This Spanish band showed they could make a real fine and folky album with their previous one ‘Tales of a Forgotten Hero’ which dates back to late 2014.
This albums starts of with the nice and folky track ‘The Valley of Dragons’, this track starts like an intro, but is quite a full track. It has all those elements we like Steignyr for, the solid music and nice Celtic folk elements.
This sound is their strongest point, after the slighty less convincing ‘Sons of Earth’, they show with ‘Wild Land’ they’re capable of writing nice songs, the epic Celtic sound, the dark vocals of Jön Thörgrimr suite the music well, the sound of whistles gives it a lighter tune, just perfect. In this style we get song after song, until we get to ‘Awakening Revenge’, I don’t know what the purpose of this song was, but it doesn’t came out well. While listening to this album a few times while I was doing other stuff, I checked time after time if I didn’t have two streams running. The vocals don’t fit together and to the music. Unfortunately this continues in ‘Spirit of Victory’.
After this we get ‘The Grave of Heroes’ a track which is a kind of outro, but this description is doing the song no justice. This instrumental track is again a very nice one, beautiful composition, and because of it’s atmosphere it’s at the best point of this album there is for this song.

Steignyr has proved again they’re very capable of writing good songs at ‘Prophecy of the Highlands’, the downside of this album is, it should have been a 10 track album. The 10th and 11th track are not worthy for this album. ‘Prophecy of the Highlands’ would have been a much stronger album without these two songs. But the rest of it is absolutely very tasty.