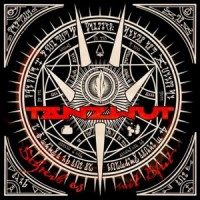 ‘Schreib es mit Blut’ is the 10th studialbum by the German Medieval rockers of Tanzwut. And they decided to go further down the path they chose to walk on with their previous two albums. The titles of these album point the way: ‘Höllenfart’ (2013) (Journey to hell), ‘Freitag der 13.’ (2015) (Friday the 13th), it’s sound all a bit darker an now ‘Schreib Es Mit Blut’ (Write in Blood). The band follow it’s leader ‘Teufel’ (Devil) on his path into the dark side. But the medieval rock of Tanzwut hangs on to the partying side of things. So, don’t expect it to become all grimm and dark and smudgy. The lyrics go to the darker side of things, and the music has become somewhat louder on the last three albums, it has an overall feel of of fun.
This is the way for Tanzwut to keep their fans satisfied, while they’re exploring their capabilities. Subway to Sally is moving somewhat in the same direction, but they involve the music into this, becoming less and less medieval. Tanzwut decides to move over to the darker side as well, but keep the medieval feel, and I’m very glad they do. There’s plenty of room for the bagpipes in all their songs, and this is one of the unique selling point of these Germans.
Once again they lace up one nice song after another to create another very fine album, the only thing I’m missing are really great hits on this album. Maybe the bonus ‘Stille Wasser’ featuring Liv Kristine is the most outstanding song of these album. Remarkable, Liv does a lot of nice things, but while the song is typical Tanzwut, the vocals of Liv, are in the typical style of Leaves’ Eyes.

Tanzwut has created another very fine album with ‘Schreib Es Mit Blut’, again songs, which will be very nice to hear them live. Tanzwut is true to their sound, despite the fact they seem to remain in the darker and somewhat louder part of Medieval Rock. A sound which I like very much, let’s hope they keep on creating a lot of these albums. And to be honest, I don’t believe I will be disappointed in that.

Bonus CD (only available in the Deluxe-­‐Box-­‐Set)