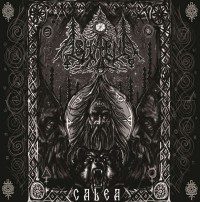 I wish I knew more about Ashaena before I heard this epic new album from them so I guess I will have some catching up to do. This is actually their 2nd album (debut “Cei Născuți Din Pământ” was released in 2009) so it would make sense that they were off my radar so to speak. This Romanian troop will now be joining the ranks with Dordeduh and Negura Bunget amongst others as killer exports from this dark and mystical country. Although described as pagan black metal, I don’t know if that is super accurate, in some cases I can hear it but dark folk and melodic death can be pretty tangible at times too. I could hear maybe some Dissection in there or maybe some Agalloch, Nokturnal Mortum or Graveland as possible influences but they delve into a couple of different genres throughout the album.
With an average track length over it’s 7 songs, Ashaena build the darkness over time throughout the tracks with occasional blast beats thrown in to heighten the anxiety. The riffing also tends to have some progressive touches as well with some off time beats and breakdown parts which even further propel the songs. Vocally, there are lots of chants and choral parts along with the main vocals which are drawn out and have a semi-doomy style about them as opposed to the screechy black metal variety. This album is worth purchasing just for the vocal/choir parts in “Mos Urs” alone… I thought I was hearing an unreleased Mithotyn track from back in the day. While still heavy, there is a nice accessibility to “Calea” which is hard for heavy acts to sometimes do……not scare people away by being too heavy. The folksiness of Ashaena really shines thru on tracks like “Tara Berlandnicilor” with a very prominent whistle and woodwind riffing over the guitar, bass and drums. So, I again would not really consider them black metal but they certainly delve into numerous style which all work under the banner of being Ashaena.
The production has a smooth, semi-foggy sound to it, not to the point of being inaudible but adds more to the mood and feel of the overall album. I have listened to this album for a few days now and I keep hearing new things as it is richly diverse and different and yet still pretty familiar with numerous apparent influences (at least to me).
A great 2nd album from these Romanians who have really taken a huge leap forward in terms of style and sound… great album.