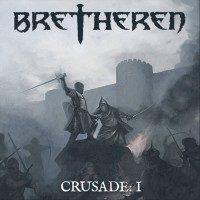 This one’s a headscratcher for sure. Up to this review I’d not heard of Brethren. So I don’t know much about them. Thus far when I get something to review I’m to assume it’s a finished product, so I’m going to review this one as such. Usually when I listen to metal I don’t worry so much about lyrics or vocals. Unless they’re clean singing I just consider it another instrument and hopefully it compliments the rest of band. I’m forced to assume maybe Brethren does not have a vocalist, because out of the seven songs on Crusades: I there is only one song with any vocals to be heard of, unless you count Deus Vult. Which was more of a spoken word deal than anything. This is pretty frustrating because every song on the album sounds like the vocals are about to kick off, then they don’t. So it’s hard to really say too much about their sound because it just doesn’t ever sound complete. Furthermore I doubt anyone really listened to it all the way through before calling it done which just adds to the frustration. Case in point, the song Stronghold seems like it’s over right at the 6:00 mark just to start right back up , giving you an extreme sense off deja vu, just to cut off mid riff. Similar issues pop up at the 3:45 mark of Order of Hospitaliers. There’s around a minute of what I’m thinking was supposed to be an interlude or short instrumental , but it’s slapped on to the end of the track more like an oversight than an afterthought.
Now maybe I’m just completely missing the mark, and this album was intended to have six instrumentals. Judging by the fact that it’s called Crusades: I, though I’m thinking it’s a theme/concept album. In my experience those tend to tell some type of story. Maybe they decided to just go sans vocals, because on the one track that did include them, they were definitely the weak point. They sounded very forced and had way too much reverb to them making a kind of tin can effect that just didn’t work well. All of this really makes it hard to give it a great review which is disappointing because on the musical end of things it’s not terrible outside of some more mixing oversights. They have kind of a Turisas or Ensiferum sound to them, mix that with a medieval vibe and you have what could have been a pretty decent album. But alas , this was not the case and it just comes off as kind of mess.