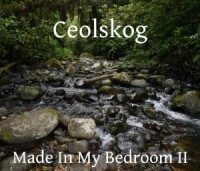 I love folk metal. I listen to it because really brings out all the feelings I’d ever want from music. I love when it sounds happy. I love when it gets me pumped while I mop floors and scrup toilets at my shit job. I especially love when my favorite folk metal bands go acoustic or do covers. This album tries and falls flat on almost all these things. I’ll go with the positives, because to be completely fair Adam Halliwell obviously has talent.
When I heard Soria Moria and Mister Explorer I thought “Wow this is going to be pretty good”. And there were other moments too when he does his metal I liked it; there’s a bit of wilderun when things are at their best. Unfortunately songs like The Icy Winter Spider and Loneliness and Tinnitus ruin the whole thing. Have me asking “Why” and “Really?” Like I said before I love a good folk metal cover but the choice of “Some Promises have Been Made to Me” was questionable at at best. At four and a half minutes long I felt as miserable as lyrics. Maybe it’s the fact I do most of my listening at my aforementioned shit job but the last thing I want to hear about is someone whining about theirs to the point of mentioning suicide, and that doesn’t even touch how repetitive it was. And thats just first mention of suicide. Loneliness and Tinnitus was like a depressed Jack Johnson song with metalcore lyrics. It was so draggy and depressive by the time Hammerheart came around I didn’t care that it was a decent song at all. I was still shaking my head at the last one. Thing is the good parts are good but I think maybe he should take the opportunity to network and find some other talented people who can help rein in the bad ideas and put together a good album from start to finish.