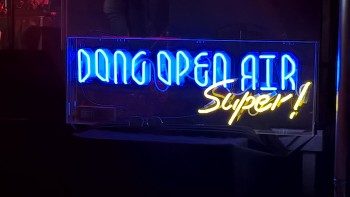 Great little festival in western Germany
The Germans have their own words for everything. So, calling this festival a hidden gem, in German you would address it as a ‘Geheimtipp’.
And that is just what this festival is. Just over the border from Holland in the ‘Ruhrgebiet’ Dong Open Air is held since 2001. A simple but effective formula: bring people to a little mountain just outside the villages and cities, put up a tent with one stage, get some nice bands from all sort of loud music, have a drink, have a laugh and be happy. Works like a charm. A lot of visitors are regulars and told me that the atmosphere is excellent every year. I had no trouble believing them. Funny that with a maximum capacity of 2.500 visitors there are actually more than 7.000 people on the big camping on the hill!

This year the line-up was superb. Not only folk metal, but also thrash, melodic death among others. For such a small festival they have rather big names on the bill. How about Haggard, Equilibrium and Testament as headliners? The good weather was a bonus. The security was firm, but reasonable. The way crowdsurfers were helped deserves a positive mentioning. All in all very enjoyable. Flaws were scarce. So yeah, it took an hour and a half to change your ticket for a bracelet. And one time a beer pump broke down. The organisation recognizes these flaws immediately and promise to do even better next time.

So how about some folk metal then? A word on 5 bands that have ties to our beloved kind of music.

Suidakra
The band is in great shape. I would have loved to see female singer Tina or the bagpipe-player, but that was not to be. Nevertheless a solid show, including classics like Isle of Skye and Dead Men’s Reel. The tent wasn’t full like it was when next band Rage played. But everybody who was there had a good time. Lots of crowdsurfing and a decent pit.
8/10

Amorphis
Why do you need a full hour to get ready to play? The drum kit is rolled on stage within a minute. The audience does not see anything happening, but nice as most German people are, no one is complaining. The sound is excellent, like it is the entire weekend. The music is great, because, hello, this is Amorphis playing. The set list has a few songs that the band does not play every show. And yet, there is something lacking. Maybe I have seen the band too many times. The interaction with the audience is somewhat sterile. The show is good, but somehow not that much fun.
7/10

The Pokes
If you like to have a party, it’s a safe bet to invite The Pokes. The band name resembles that of the famous The Pogues and that is not incidental. Festive music, lots of smiles, an accordionist who looks like Phil Collins, a singer with stiff hips who understands how to make the audience have a good time. From first song God Save The Pokes until the very last song everything is brought very professionally and convincing. Enough variation in speed and feel of the songs to keep it interesting. A lot of fun. I enjoyed my little chat with several band members. That confirmed that fun is what the band is all about.
4.5/10

Equilibrium
Every time before I see Equilibrium I am a bit apprehensive. It is no secret that they are among my favourite bands and I have never experienced a bad concert from them. So, statistically speaking, the chance of a bad concert gets higher and higher. But I didn’t have to worry. At all. The band is as good as ever. And they are clearly enjoying themselves. Happy faces all around. A continuous mosh pit and multiple crowd surfers to keep the security busy. Blut Im Auge, Unbesiegt, it’s all there. New song Prey is played from upcoming album Armageddon. Typical Equilibrium song, which brings high expectatios for the album. Great sound, great show.
9/10

Skyclad
Probably the least loud band on the festival. Yet the most typical folk metal band there. In fact, it is no exaggeration to name Skyclad among the founders of folk metal. Apparently it was no easy feat to bring all the member at one place on the same time, but they succeeded. This was the sixth time they played Dong and the crowd reacted very positive to their old friends. Lots of drinking songs inspired to dancing and moshing. Again a band who knows how to enjoy the crowd and themselves. Nice party.
8/10

So, a great little festival at a fantastic location. Striking good sound and a superb atmosphere. I think I’ll be back.