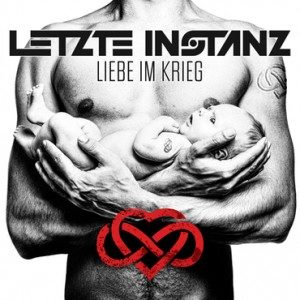 Nineteen years and numerous albums after their first release in 1997, Germany’s Letzte Instanz is back with another studio-album ‘Liebe im Krieg’. Their style has developed into an unique sound, I can’t say there’s a lot of folk left in their music. Folk and Medieval were always a bit subdued in their music, they were a part of the Medieval scene in Germany, probably caused by the use of cello and violin. But they were always an outsider which fitted in very well.
Their musical signature has become the songs in which singer Holly drags the audience into a massive sing-a-long, the track ‘Wir Sind Allein’ is an absolute killer in this way. These kind of songs have become more and more their trademark over the years, but this seems to have reach a new level with ‘Liebe im Krieg’. Their new album loaded with these kind of songs. Undoubtedly an absolute killer album for the Letzte Instanz fans, I can image a lot of Letzte Instanz fans will see this album as the best the band has ever made. From a Folk-metal.nl point of view I regret the album is derived of any folky tunes. I’ve listened to this album many times now, and I can’t find a Medieval or Folk-element worth mentioning.

So, to be short. Great album for the fans of Letzte Instanz, but I’m afraid the band has said it’s last farewell to the, already rare, medieval and folk moments in their music.