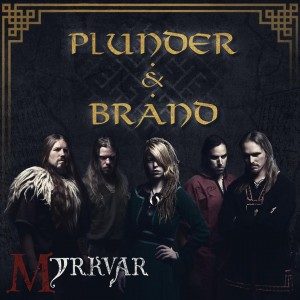 Has it been 4 years since the epic “As En Bloed” was released by the mighty Myrkvar? I can’t believe it was that long ago… probably because I still listen to it all the time I guess. Well a new EP has just been released entitled “Plunder En Brand” (“Pillage And Burn”) and yes it continues in their history of epic releases.
This 4 song EP is nice reintroduction into all things Myrkvar with a few subtle changes style wise. Never heard them before? I think another Dutch act like Heidevolk would be a starting point maybe mixed with some Kivimetsän Druidi? Or a thrashier Viking metal version of Windfaerer? It’s not easy to describe their overall sound. Let’s just say they are both heavy and folky with some pretty omnipresent jaw breaking riffs and keys and violin mixed in for good measure. This also continues in their “concept” releases (“As En Bloed” had a Norse Mythology theme to it) with “Plunder En Brand” retelling the legend of Attila the Hun but it is not readily apparent that this is what it is. The songs stand alone as killer tracks and don’t rely on each other to be storytelling.
The opening title track has a middle eastern vibe to it and that is where I think most listeners will notice the change in their sound? Is it permanent? Probably not since this is a concept piece after all. “Wanhoop en Angst” (“Despair and Fear”) continues in that same vein as well while 3rd track “Hunnenhorde” (“Hun Horde”) is actually a reworked version of an older track “Geboren uit Oorlogslendenen” albeit a shorter version than the original. The final cut “Gesel Gods” (“Scourge of God”) ends the EP on a high note for me, a little more of a “traditional” Myrkvar track to me, dirgey at some points and thrashy as well. The EP is only a total of about 18 minutes so a relatively short listen but definitely worth checking out. Probably the best recorded release of theirs up to this point with a fuller, richer overall sound with a little more midrange and thickness to it. While still Myrkvar at it’s core, they have expanded into some new territories sound wise and taken a step forward while doing so.
Good to hear something new from them after a long time off…. again I hadn’t thought it was that long, time flies when you’re having fun listening to “As En Bloed” for 4 years… great release.