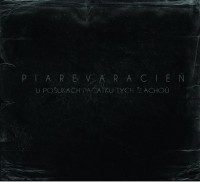 Piarevaracien, Pagan/Black-metal band from Belarus, revealed themselves to us with their participation in the Triunity project, together with Oprich and Chur, back in 2012. And this wasn’t an unpleasant surprises at all. Now, a few years later, they are back with an full length, although this album is only 36 minutes long.
So, now we can listen to them playing free, not longer bounded to the limitations of the Triunity project.
And that sounds different from the start, we don’t get to hear that laid back Indian summer feeling of their part of the project. But in stead of this we get a massive sound with clean vocals on top. And they manage to sustain this massive wall of sound which isn’t plastered with lots of distortian and other technical add-ons. No, you can still see the structure of this wall, carefully build up by guitars, drums and bass.
The concept of this album is a war-story, that’s why the band has chosen to divide it in sections in stead of giving each track a title of it’s own. A nice choice, the downside of this approach is, it’s not obvious to listen to single tracks of this album, but you can listen to them separately, surely if you don’t understand the language. Maybe if you do, it’s better to listen to the whole story, but I can’t judge that aspect.
Piarevaracien has done a nice job with this new album. I really like their style with their heavy sound but clean vocals.